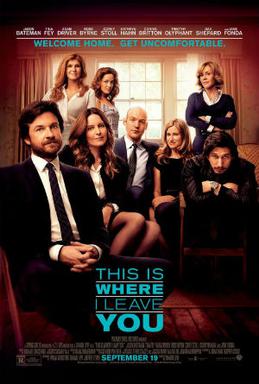 This Is Where I Leave You

Directed by Shawn Levy, book and screenplay by Jonathan Tropper

This is a hilarious film that blends humor and drama together in a fresh and at times unpredictable fashion. It’s a relatable story that will hit home with anyone that has a little bit of dysfunction in their own family.

The story begins with Judd (Bateman) finding out that his wife is cheating on him with his boss. He then gets a phone call from his mom (Fonda) telling him that his dad died. So basically, this kid just can’t get a break. Things get worse when his mom tells him that the whole family is going to sit Shiva, which is a Jewish tradition where all the family members sit around for a whole week and people go and greet them. This means that Judd and his three siblings, (Driver, Fey, and Stoll)

I actually read this book here recently before I watched the movie. One of the things that appeal to me is that the story is fairly unique. Judd isn’t the first fictional character who has family and wife issues, but his whole demeanor and some of the supporting characters make it different from movies dealing with similar subjects. One thing that I specifically disliked about the film was the romance parts. I probably wouldn’t feel this way if it wasn’t for the book, but I still think that the book handles the truth about romance in a more realistic way than the movie. But then again, it IS Hollywood. I do think that the plot itself was one of the best things about it. There’s several twists that you genuinely don’t see coming, which is a surprising yet very good thing.

Jason Bateman did a nice job with the role of Judd. I was hoping for a little more humor from him since Bateman is a hilarious guy in some movies, but this particular role didn’t really allow for that. Jane Fonda was so funny and sassy as the mom. She played the part exactly the way I pictured it when I read it. I was also impressed by Adam Driver in particular. Again though, he was cast as the youngest and funniest child of the group so his character gave him more room for some humor. He shined because he was such a natural in the role and that was extremely obvious throughout the film. I expected even better from Tina Fey but at the same time, it did give us the chance to see a different side of her, which says a lot about her as an actress.

I think Shawn Levy did a solid job directing this film. There wasn’t all that much to the job honestly, but there were a few memorable scenes where the camera work was imperative. It seems to be a simple and straightforward directing job on his end, but he still managed to make an intriguing film filled with a superstar cast. All in all, the man is known for his involvement in many different successful comedies over the year and he continues his trend with this one as well.

At the end of the day, this is a film about family and how we learn to live with the one that we’re given and also the one we’ve chosen to create. The movie manages to find a middle ground between drama and comedy, which surprisingly enough, works in This Is Where I Leave You. This is the type of film that you watch if you’re in need of a good story that is guaranteed to make you laugh out loud on several different occasions. It’s not the best movie I’ve ever seen, and it’s not the funniest, but there’s something about it that really sucks the audience in and makes us want to watch it.