Check out the Fallout 4 trailer here!

After a slow start, I am officially hooked on Fallout 4. I don’t think I’m quite at the halfway stage as far as the main story is concerned, but I’m far enough in to have discovered the basic plot of the game.

The idea that a game (or other mediums) can change people’s perceptions on life is nothing new. But never has a videogame’s message been so relevant, so timely as this one.

The story has really got me intrigued. Not just for its depth and detail, but also because of the startling comparisons that can be drawn between post-apocalyptic Boston and the modern day war on terrorism. I thought I would share this with you all. You can draw your own comparisons as I explain the plot, but I’ll sum up what I see at the end.

This is what I see as the story behind Fallout 4. I should note that there could be some MINOR SPOILORS, but there shouldn’t be anything major as I’m only part of the way through it myself!

Fallout 4 is set centuries after a nuclear world war that completely changed the landscape of America. As a result of an almost martial law, the area known as the Commonwealth (the remains of modern-day Massachusetts) is split into different groups. Some of these groups of people are relatively small and peaceful, but a few major factions are in play.

The main terror (note) for people of the Commonwealth is a group known as the Institute. The Institute have been creating synthetic humans – known as Synths – for many years. Originally these robots were purely functional (think iRobot), but as their technology has improved they have started to create more and more human-like machines, to the point now that a human and a Synth are inseparable, in appearance and emotion. The Institute use these human-machines to infiltrate places before they use their powerful strength and combat abilities to kill on command. The Institute also have Snatchers, who steal real people and replace them with an identical Synth, who can act as a killing machine whenever the Institute see fit.

The Institute are completely unknown past the Synths they create. Nobody knows who they are or where they come from, but everybody fears them. Also, a Synth’s ability to look completely human, along with their ability to replace real people, has led to a serious case of paranoia throughout the Commonwealth, where innocent people refuse to trust each other out of fear that the other could be a Synth. There is also a prejudice against honest, hard-working Synths that have done nothing wrong.

There are two major groups that are fighting the Institute (or at least attempting to). The first is the Railroad, a charitable but equally extreme group named after a real 19th century Boston slave-freeing group of the same name. Much like their 19th century ancestors, the Railroad exist to save all runaway Synths from the Institute’s grasp. They believe that modern-day Synths have enough emotion to make them independent (hence their ability to run away), and as such they deserve to be free of the Institutes grasp and live just like humans. 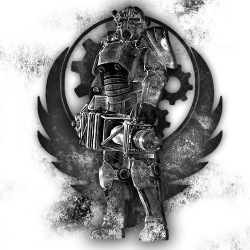 The Brotherhood of Steel.

At the other end of the charity spectrum is the Brotherhood of Steel, one of the largest and most organised institutes in the whole of wasteland America. Seen as the biggest threat to the Institute, they believe that because humankind’s need for technology led to the nuclear war centuries ago, that all technology is evil and detrimental to humankind’s survival. They plan to take all of it for themselves for the good of the people, however this ideology does not include Synths, which they believe to be a complete abomination. Armed with incredible military technology of their own, including a futuristic zeppelin called the Prydwen, they plan to eradicate all traces of the Institute from history, at all costs.

With the Brotherhood stepping up their approach in the Commonwealth, it is likely the three differing ideologies are going to come to a head in a massive war, the outcome swaying on the player’s actions.

That’s just the bare bones of the story (it might not even be 100% correct, I’m just going off what I’ve seen), and perhaps explains for non-Fallout fans what the appeal of this game can be. I will do a mini review of the game when I complete it probably, but for now back to the terrorism argument.

The war on terror 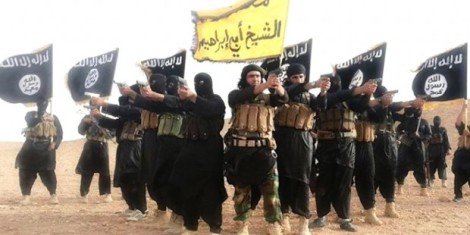 The recent terrorist attacks in Paris, along with the vote in the UK on whether we should bomb Syria or not, has really brought terrorism to the forefront in this country. Now, I’m sorry if I offend anyone but recent events have led to people having a lot of personal opinions on Daesh. Regardless, I think there are major links between them and Fallout’s Institute.

I believe that Daesh is an idea, and what we are involved in is a war on ideology as much as on people and places. We don’t know exactly where they are, the group almost moulded into innocent people in Syria and abroad, causing havoc wherever they set foot. Also, the people responsible for the Paris attacks got into France acting as Syrian refugees, seemingly innocent people that turned mass killers upon request, much like Synths. This hasn’t just caused mass horrors, but has led to paranoid discrimination against certain members of society, particularly in targeted countries.

The two approaches to this war seem to be either the passive ‘railroad ideology’ (teach that Daesh are wrong, re-educate the extremists) or the aggressive ‘Brotherhood ideology’ (bomb Syria until the horrible group gives up). Both groups have solid arguments.

While brought back to life recently, the threat of terrorism is not something new. I think that, due to the startlingly obvious comparisons that can be made between terrorism and the Institutes grasp on the Commonwealth, it’s likely that the plot for the game is inspired by the most dangerous threat to normal civilization in the 21st century!

What do you think? Am I overthinking this, or are the events so perfectly inline that we could actually learn something from the videogame!?

It’s worth asking yourself, in the context of the videogame, who would you side with? The Railroad, or the Brotherhood? Does your view on the game differ with your views on the terrorism crisis? Let us know your thoughts (but no spoilers)!

You know what they say. War, war never changes.