Time for part three of our Anime Pocket Reviews! This time, we look at two different invasions of earth, two sci-fi series with similar plots but differing angles. It’s quite interesting when you compare these two against each other…

Fifteen years ago, a war broke out between the numerous people of Earth (Terrans) and the technologically-great people that colonized Mars (Vers/Martians), the war resulting in the destruction of the moon, a catastrophic event for Earth and Mars known as ‘Heavens Fall’. Ever since, tensions between the two colonies have been on a knife’s edge. In an attempt to create peace, Princess Asseylum of Vers heads to Earth on a rare official visit. However, on her first visit to earth an assassination is plotted against her. Her car is destroyed, the princess presumed dead. The Vers Empire witnesses this and immediately launches a full-scale attack on Earth, determined to conquer the Terrans once and for all.

This is a really solid piece. Unlike most anime’s this isn’t based on any previous work (such as manga or novels) but is made purely by production companies, with a big budget behind them. This shows from the start, with the whole series very neatly drawn and action scenes almost looking more like CGI than anime.

The characters are also very brightly drawn, with very soft edges. I can’t decide if this is a help or a hindrance, the quality of drawings making all of them look innocent, almost childish (a la Sword Art Online). This does take away from the general drama that should come with war (something Attack on Titan mastered), which is perhaps the only thing stopping me from calling this great. However, the innocence of the characters does make the dramatic moments stick even more. The shower scene at the end of episode 9, and the ending of the series, are really powerful moments of exceptional drama.

This is also a good example of pitting two sides against each other, while not creating a clear enemy (at the beginning anyway). This, combined with back-able characters on either side, makes you question who’s doing the right thing at all times, something few shows are able to do well. I should add that this aspect is lost the further into the series you get, but I feel like that might come back in future series’.

Overall, this is a pretty solid series. It lacks the bite to be an epic, but the drama of two different sides and opposing characters with viable reasons for their actions does make a deep and engaging show. This definitely needed much more episodes to strengthen relationships and explore the characters and their reasons further, and while I’m not really hooked by this series alone, I have a feeling I’ll be wax-lyrical about this by the end of series two! 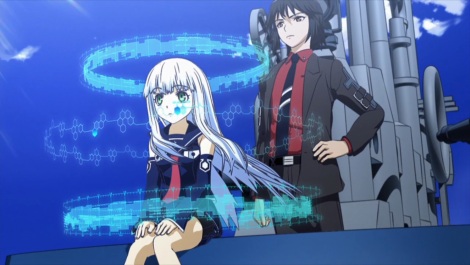 In the future, the effects of global warming have wiped out most of Earth’s landmass, the majority of land lost to the sea. The world is then attacked by sentient warships of advanced military power, collectively known as ‘The Fleet of Fog’, who imprison society by ruling the waters and blocking aerial travel. To overcome their lack of creative thinking, the only advantage humans have over the machines, The Fog create Mental Models, human-like avatars that can control the ships they represent. The story follows Chihaya Gunzo (above) and his crew ‘Blue Steel’, famous for possessing Fog submarine I-401 and its Mental Model Iona (also above), who’s wilfully working for the humans. They are hired by the Japanese government to deliver a specially designed weapon to the USA for mass-production, a weapon that could turn the tide of the war. As they progress they start to gain more allies, as Iona and Gunzo show the Fog what it is to be human, something the Fog resent.

Arpeggio isn’t that bad, but it’s not that great either. To have watched something through to the end means it has something about it, but I’m not sure what that is exactly. First of all, this series is very colourful, with ships all having a unique colour as a means of differentiation a la RWBY. The models all seem to have their own personality too, although this ‘personality’ is almost wafer thin, with almost no characters in the whole series having any meaningful depth. The naval combat, understandably, is very slow so lacks the punch of other anime’s that can make their name with fast-paced action sequences.

Much like Aldnoah above, Arpeggio pits two opposing views against each other. However, while Aldnoah does an excellent job of painting not only the different beliefs but the power one side has compared to the other, Arpeggio struggles in both these areas. Because the theme of the series is how the human psyche can beat the routine-based machines, it struggles to get across to the viewer that The Fog are actually meant to be massively more powerful than humans.

This is a perfect example of the Japanese anime stereotype of overly-sexualising female characters. They are actually really fun characters when they begin socialising at the end (something I think Arpeggio should have played on more), but you still have that nagging, slightly uncomfortable feeling that comes with childish cartoons flaunting themselves, although with that being said there has been worse examples of this in other shows.

Overall, this is a series that with a few tweaks could have been really good. However, it ends up being something that is very average in many areas, seriously lacking any sort of star quality or iconic moment or even a little bit more character depth to bring the series to life. Personally, I think it needs to either play on the fun-loving angle that it utilises at the end, or the ‘us against the world’ motive that the series starts off with. In the end, it simply floats around in the middle, meandering to a conclusion that never truly satisfies either end.

What did you think of these anime’s? Am I too harsh on Arpeggio? I’m interested to hear from people who thought it was any good, because I could have missed the angle they were looking for! I doubt it, but still.

Also, since these are two sci-fi wars, what do you think is the best sci-fi, war-based anime ever made? Comment below!

Make sure to follow The Culture Cove to see the best anime reviews before anybody else! Look out for the next episode of Anime Pocket Reviews, featuring fun-filled duel series The Asterisk War!