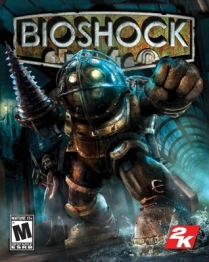 Set in the 1960’s, Bioshock is heavily influenced by the philosopher Ayn Rynd and her idea of objectivism. The player controls Jack as the plane he is on crashes into the Atlantic Ocean. He’s seemingly the only survivor of the crash. He swims to a nearby lighthouse and discovers the mysterious underwater city of Rapture. Built by billionaire Andrew Ryan (Ayn Rynd connection #1), the underwater utopia was intended to be a haven for the rich and prosperous, a playground for the biggest and brightest minds to do as they please with unlimited money and no moral or governmental restraints. With complete freedom, science advanced at incredible speeds, the greatest discovery being ADAM, a substance that when injected alters the human’s DNA, giving them superpowers such as telekinesis or pyrokinesis. However with no rules the place fell into anarchy as people tried to take over Rapture, particularly with the help of ADAM, and the addictions and paranoia that come with it. The game follows Jack as he tries to survive in the broken utopia, piecing together what led to the downfall of what was meant to be the perfect utopia.

“My philosophy [objectivism], in essence, is the concept of man as a heroic being, with his own happiness as the moral purpose of his life, with productive achievement as his noblest activity, and reason as his only absolute.”
Ayn Rynd, Atlas Shrugged

Objectivism is very hard to explain and grasp. However, it might hint to an explanation that one of Rynd’s books on the subject is titled ‘The Virtue of Selfishness’.

I loved the original Bioshock game when it came out, simply because it scared me so much I couldn’t play it (hence the vague plot description)! It created an incredible feeling of wonder at the world while at the same time being absolutely petrified of walking into it.

So, could it make a movie?
The simple answer to this question is yes. The film was confirmed and set for release in 2011, with Gore Verbinski (Pirates of the Caribbean) directing. However, the film was put on hold due to budget issues, specifically the fact that no studio was willing to fork up the budget necessary to produce it and risk such money on an R-rated movie.

Then what type of movie would this be?
This is something that could go one of two ways, in my opinion.

Option one is that Bioshock is a steampunk-styled mystery. This game has a very strong backstory that tackles a pretty big and sophisticated subject in objectivism. This, married with contrasting beliefs and deceitful characters, set in a beautiful world with an undercurrent of horror, could be a really interesting and twistedly-sophisticated film.

Option two, what I think they should and will do, is turn this into a pure, no holds barred horror movie. While there is an interesting backstory to be told, and plenty of potential for mystery, at its core this is a scary game. Much like the setting, it lures you in with pretty colours and beautiful sights before flipping on its head, turning into a rotten, gory world with terrifying enemies. I think any movie adaptation of Bioshock should have horror at its core before anything else.

Also, while this likely won’t happen, there will become a time when POV (or even virtual reality) movies get a shot at the mainstream. POV these days is only really done when there’s some excuse for the lead to be holding a camera, something this movie wouldn’t have. I would love to see the movie adaptation of Bioshock shot from the view of the main character, just as the game is played. That would create an incredibly immersive experience and really throw the audience into the Bioshock world!

I think this video of the very beginning of the game backs up my point. If you’ve got time you should really check this out!

I’m not going to review the gameplay because I’ve only ever got about an hour into the game. However, here are two more reasons why I think Bioshock could be a great movie, besides the horror and backstory:

The Little Sisters and Big Daddy
Underlying the whole disaster of Rapture are the Little Sisters. In the early days of ADAM production, the sea slugs that it came from weren’t producing enough. To increase production of the drug they implanted the slugs into the stomachs of small girls (ew.) who ended up producing tons more. Nowadays, the ghostly children dancing around with big red syringes are the primary source of ADAM, and therefore Rapture’s crazed civilian’s number one target. However, because they were being targeted they created bodyguards called Big Daddy. These giants in old metal scuba suits follow the Sisters around with the only goal being keeping them safe, and mutilating anyone that tries to harm them. This does raise some questions, namely are these girls good or evil, something the game forces you to answer by making you either kill them or save them. 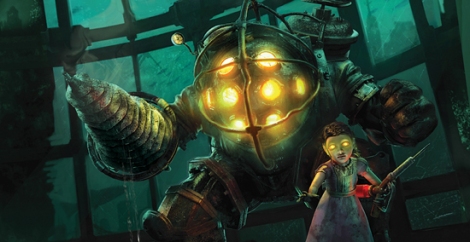 It would be interesting to see how a movie adaptation tried to capture this relationship. It’s not quite enough to become a centre piece, but it has enough potential to add an interesting dimension to the whole story. Personally, I think you almost have to overplay them, make them seem more important than they actually are, as not doing enough with them will disappoint the game players and really not make much sense in them being there.

Rapture
In rapture, they have an incredibly beautiful yet haunting location. If done properly, this could look really good on the big screen, however it would probably require state-of-the-art special effects to do it justice. This would be the backbone of the movie, its making or breaking, which is probably why this movie is too expensive to make right now.

Also, as a footnote to the people making this film (because they’re totally reading this), there’s one thing I think would ruin the movie adaptation:

Backstory Overload
I can picture the opening to this movie now. Fade in to the landscape shots of Rapture (as seen in the trailer), where somebody narrates about the history of the city for about five minutes, putting the audience in no doubt about what’s going on. That’s an easy way out, and would totally ruin this movie, especially for people who have already played the game. What I loved about this was having no idea what was happening, simply focusing on surviving against the crazy people. To explain the backstory at the very beginning would ruin this mystery, and for me ruin a key part of the film (and game), that first encounter!

Overall, this will (because I believe this will one day be a movie for sure) be a great movie so long as it’s done right. Give this to the right writer, and a studio and director with previous experience in the horror genre, and I think you could have something of a cult classic on our hands. Personally, I would much rather see this become a thing than waste millions on a Pacific Rim 2!

GAME REVIEWERS WANTED! Ever wanted to try your hand at reviewing you’re favourite videogames? Why not join us and share your experiences with the world! Click here for more info…

So I ask you my friend, if your life were the prize, would you kill the innocent? Would you sacrifice your humanity?