Again we have two good animes here (when have I ever let you down?): one anticipated sequel; and one unexpected success!

Set half a year after the events at the end of Durarara, X2 is divided into three 12-episode arcs. First is ‘Shou’, where the mysterious killer Hollywood breaks into the madness of Ikebukuro, Celty accidentally breaks into popular culture, putting a price on her ‘head’, the Russian assassin Varona arrives with her sidekick Sloan and the powerful Toramaru gang from outside the district get involved after the spiralling Dollars attack their bikers.

Secondly is ‘Ten’, in which Celty’s head starts to change hands and the powerful crime unit Awakusu group are dragged into the chaos. Talent agency Yodogiri take an interest in acquiring some of the characters of Ikebukuro, namely Celty and her head, for which they send the almost mechanical woman Kasane to hunt it down, and as the Dollars continue to spiral out of Mikado’s control, he teams up with mysterious blue-haired student Aoba to try to restore the gang to what it was.

Thirdly is ‘Ketsu’, where the main plot stories from the first two arcs start to reach their conclusion. With the Dollars turning darker and darker, along with Mikado, Masaomi recreates the Yellow Scarves so he can ‘beat him into sense’. Celty’s head is revealed to the world, as Kasane prepares to goad her out. Meanwhile, it is revealed Saika (Anri’s demonic sword that lives inside her) doesn’t solely belong to Anri, but is also wielded by others across the city (namely Kasane and one of Izaya’s sidekicks Haruna). As Saika, Dollars and the Yellow Scarves prepare to face off for their own reasons, the legendary feud between Izaya and Shizuo leads to a fight to the death.

The first season was rated in our 15 Anime Review as the second best anime we’ve seen, so this had big shoes to fill. However, I think it did a really good job!

Something X2 does really well is that it keeps the magic from the first series, particularly those character relationships that continue to grow and excite. It’s like chemistry class, where you’re constantly wanting to mix different things together, just to see what happens. You’re constantly looking forward to characters meeting each other, just to see their reactions to each other. It’s a similar idea to recent blockbuster cinema successes like Avengers and Batman V Superman, and once you’ve watched so many episodes and seen these characters develop over such a long time, it ends up carrying much more weight than the superhero movies, for me anyway. Also, it has another solid plot in the background which allows the really interesting characters to thrive, although like in the last series the importance of this is seemingly minimal – I had to search the plot to write above because I forgot what it was!

Of course, no second series would be without criticism. With 36 episodes, it did start to seriously tail off just past the halfway mark. It almost got too confident for its own good, throwing out whole episodes of narration that were meant to have a deeper meaning but ended up just having no weight. Also, while the majority of new characters were as exciting and as engaging as the others, I felt that the character Aoba, someone who plays a major role in the story, was really thin by Durarara’s standards. Thankfully these problems – which at one point had me forgetting about the series for a few days (also down to the show below) – were sorted by the end, which was as lively and as fresh as the show was at the very beginning!

Counting both series, I’ve now seen 61 episodes of this, amounting to over 26 hours of content!* That’s a lot of time, and while the show may have started to show some signs of fatigue during X2, it continued to battle on, putting faith in the formula that made Durarara the success it is. In my eyes, X2 has definitely been a success! 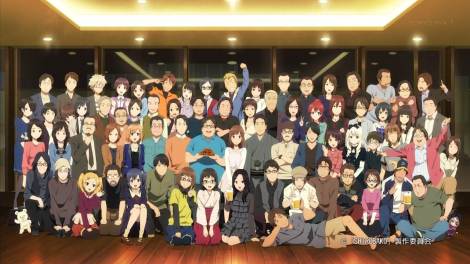 Shirobako (meaning white-box, the tapes of finished productions distributed to TV stations etc. prior to its release), follows five childhood best friends who all aspire to move to Tokyo and work in the anime industry, sharing the dream to recreate their high school animation project as professionals once they make it. The story primarily follows Aoi Miyamori (second row up, fifth from the left, ginger hair), who works as a production assistant, helping keep in order all parts of the animation production at Musashino Animation as they go through the process of creating and airing two different anime shows, the original anime Exodus! (ep. 1-12) and adapted manga series Third Arial Girls Squad (ep. 13-24). Her other friends all take up different jobs, from Ema the key animator to Shizuka the struggling voice actress.

This anime won 2016’s Anime of the Year at the Tokyo Anime Awards, and you can see why. The story and the way it’s delivered actually gives you a real insight into the struggles and, more often, fun that comes with making the anime that we all love to watch. The detail that they go into about the entire process, details that you can tell they’ve researched, is actually really insightful. The director Tsutomu Mizushima and writer Michiko Yokote are both hugely experienced anime creators, so you can imagine they’ve been around the block enough times to take what you see in Shirobako as what actually happens, and that’s quite something.

In fact, they go into so much detail that they even made, in full, the first episodes of the animes made by the characters in Shirobako – Exodus and Third Arial Girls Squad!

This is very much a character-based piece, and while not necessarily ground-breaking in their style these characters are really good as a collective. Everyone in the show is instantly likeable (excluding those which are purposely made to be disliked), and the five friends are really driven and sometimes inspiring people. Like Durarara above, it’s the type of show where you end up picking what character you think is best, or who your friend is most like, or who would be your friend, and that’s the golden pot of character creation.

This was also a really heartfelt and sometimes emotional piece, which I totally didn’t see coming. You know when you’re watching a horror film and it lulls you into a false sense of security before hitting you? Well it’s a similar idea for this. Shirobako is super sweet – and a slight criticism for me would be that this is very often on the verge of tipping into being too sweet to be taken seriously – but it uses this as a vehicle to really hammer down some home-truths. There is a real theme of hard work and dedication to the craft throughout, but this is mixed with a big sense of camaraderie and, above all, happiness throughout that it is often just taken as read, until it delivers a moment where you sit back and think “yeah, they’re really working for this” and you can’t help but want to support them. This sense of really wanting the characters to do well also drags you right into the group, and I think I haven’t felt as emotionally attached to a character as I have to Miyamori in this, along with others in the show.

Overall, I think this is probably the most rewarding experience that I’ve ever had watching an anime, and definitely one of my favourite of all-time. The story is delivered in such a light-hearted way that moments of sincere truth get delivered with so much more meaning. This ended up being a truly inspiring piece of work, even if it’s just for me on a personal level! Not necessarily for a ground-breaking story or excellent characters, but just for the message that it portrayed throughout: that anything can be achieved with hard work, dedication and love for what you do.

My only disappointment after finishing this is that there will officially be no sequel for the foreseeable future due to the director – remember me saying he was experienced – being booked up ‘for the next few years’! I was gutted at first but then I though, at least there’s no way this can be spoiled now. This will forever be its own little pretty thing.

It seems the good shows keep on coming. Anime seems to do this, you reach the end of one or two and think ‘it might never get better than that’ and then you discover a gem like 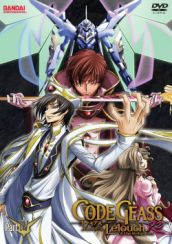 Shirobako (although you don’t really ‘discover’ an award-winning money-making success) and the cycle starts all over again! And it carries on next time…

Make sure you follow The Culture Cove to see the best anime reviews before anybody else! Look out for the next episode of Anime Pocket Reviews, featuring the Code Geass sequel, Lelouch of the Rebellion R2!