That’s a quarter-of-a-century of anime reviews!

This episode features two really successful anime. Later on we review a cult favourite from the end of last year, but first we take a look at a real comedy classic!

In this story, the world is under threat from an incredibly dangerous monster, one who just all-but destroyed the moon. He declares that the earth will suffer the same fate, but he offers them an opportunity at survival. The creature becomes the teacher of class 3-E at Kunugigaoka Junior High School, also known as the ‘End Class’, where failing students are kept out of sight. The monster, named Korosensei by the class, states that the earth will be destroyed at the end of the school year, unless one of the class can kill him before then. The Japanese government offer a reward of ¥10 Billion to further motivate the kids. However, while they are always looking to kill him, Korosensei appears almost untouchable, and also emerges as a superb teacher, improving the kid’s grades and themselves in ways that they never thought were possible.

Basically Plot: Backchatting comedy that follows the adventures of the misfit Class E and their monster teacher.

This is a really respected show in anime circles, and a show often mentioned when the teen-comedy genre is talked about. Early on, though, for me, there were a few major warning signs. Firstly, the first opening sequence for Assassination Classroom has to be one of the worst, most cringe-inducing intros I have ever seen! Secondly, the whole premise of this show is that the kids are trying to kill their teacher, which presents two more problems: either he dies, which would mean the end of the show completely; or he never dies, which makes the shows premise lose credibility. I was waiting for a long time at the beginning for the moment where these two problems would properly rear their heads, but, remarkably, the show does a very good job of taking your attention away from the grander scheme of things and focusing it on the short-term gains made by the kids with the help of their big yellow friend.

A lot of that is down to the characters. In what was a pretty unique and strangely successful move by the show, none of the characters in Assassination Classroom are given any serious back story or depth. Immediately that would sound like a bad thing, but by not giving select people more focus, AC develops a fantastic classroom mentality, where you can really feel the collective group spirit. I didn’t even realise until midway through the series that the lead, Nagisa Shiota (blue hair in the picture above), is actually a boy, not a girl, and this actually becomes a running joke in the show. The characters are formed solely by what you see occur throughout the series, and while it would be wrong to say that there’s real individual character development, the collective group’s growth is good to watch.

The comedy in the show is pretty good, too. AC is a very quick-witted show, with a lot of jokes being Shiota’s inner-narrative reactions to the strange occurrences around him. Past that, though, the majority of laughs come from Korosensei, particularly his strange characteristics. These are fairly hit and miss: some are funny quirks that even though they’re just there to help with the plot, are played so well that you don’t mind; whereas others just feel a bit too silly.

Overall, Assassination Classroom is a pretty solid, if unspectacular series. A show with plenty of wit, this will appeal to a lot of anime fans thanks to its strong group of characters. However, the artistic style can come across as a bit inhuman (it’s just so incredibly neat), and if it’s teen comedy you’re after then there is certainly funnier shows out there. What interests me is that there’s a season two out there, which – I think – is titled ‘Final Season’. From the beginning I was curious as the how a show that is so revolved around the end-goal would work, and I think it would be interesting to see how they pull this conclusion off!

If you liked this you’ll love: Wagnaria!! – While the setting changes from classroom to restaurant, these two staples of anime comedy succeed for the same reasons. Wagnaria’s comedy is formed through backchatting and sarcastic inner dialogues, in much the same way as AC. Also, these shows are some of the best around in terms of creating a real sense of togetherness between their characters. These two shows go hand in hand, and should be watched by all anime comedy fans!

Flip Flappers follows Cocona (left), a succeeding but cautious middle-schooler. One day she meets a peculiar, excitable girl named Papika (right), who drags her into an alternate dimension known as Pure Illusion. While Cocona continues to be reluctant to the girl, Papika tells her about her mission, to collect mysterious fragments scattered through the wildly varying world that are said to grant wishes, and continues to drag Cocona along on her adventures. As the two of them continue to explore the incredible world of Pure Illusion, they are confronted by an enemy group, led by fellow middle-schooler Yayaka, who are also after the fragments for their own reasons, revealing a larger, more dangerous side to their seemingly gleeful excursions.

Basically Plot: The shy girl Cocona is dragged by the excitable Papika into a world of unbelievable fantasy, hiding a dark secret.

Flip Flappers is such a strange show, there’s no real other way of looking at it. I’ve typed and deleted countless times the start of this review, because there’s so many unique parts to this, it’s hard to know where to start! I think the best way to sum this show up would be one word, the title to Flip Flapper’s opening them tune: Serendipity.

First of all, while the story is good, there’s so much nonsense going on around it that it’s hard to see through to it. I think the overarching story comes second to the general theme and feel of the series, and that is fantasy like you’ve never seen it. Throughout the show, regardless of the moment, this fairy-tale theme is a constant, which creates some really interesting contrasts in more heated and dangerous moments.

Much of this show’s appeal is down to the drawing. Flip Flappers is certainly not drawn in the classic, stereotypical anime style. The puppet-like motion of the characters, along with the use of black lines for shade and a huge variation of colours and even form – there’s plenty of painted art in this series, for example – I think its style is more reminiscent of classic Walt Disney animations than Japanimation. It was the art that drew me to this series in the first place, and I think Flip Flappers is certainly one of the most beautiful animated series I’ve ever seen.

This is where it gets tricky, as I think Flip Flappers is one of those shows that will seriously polarize opinion, and the reason for that is the free rein that appears to have been given to the creators. Flip Flappers is a classic show that you would call a ‘drug trip’, with constantly changing scenarios and, in some instances, plot. By allowing the creators to go nuts with their ideas you end up with this concoction of magnificent scenes played out with the help of an almost serene fantasy feel. However, another way to look at it is that the scenery almost overwhelms the story, and when you strip that out – which your mind is inclined to do once you realise that they’re just churning these wonderful scenes out – you’re left with what are two fairly one-dimensional characters whose personal growth together feels poorly executed at the best, and tacky at the worst.

Overall, I think this is a series that I probably won’t give enough credit to, and I know in my head that if I sat down and watched every episode religiously that I would really rate this show highly. However, on a personal level I found it too sweet to watch as quickly as I have other shows. Yes, the scenes are beautiful and I seriously would recommend this show just for the art alone, and it is also a fantastic show for fans of fantasy; but in terms of an engrossing series, there is some substance missing for me.

I would love to hear the opinions of others on Flip Flappers. I think it asks a great question of style-over-substance. Do you think it went too far with the crazy? Or is it that freedom with art that makes the most out of the story? Let us know below, or why not talk with us on Instagram? 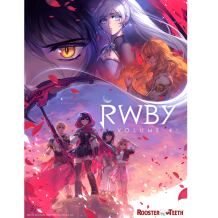 Make sure to follow The Culture Cove to see the best anime reviews before anybody else! Look out for episode 26 of Anime Pocket Reviews, featuring the fourth season of web-series sensation RWBY!