Welcome to Episode 30 of Anime Pocket Reviews! We should be excited by this anniversary, probably, but we’ve reached so many milestones recently, that reaching 30 episodes right now feels still like the early stages on the long anime road. Trust me, there’s a lot of anime to come here at The Culture Cove!

Later on we have reviews for two excellent series. However, first of all I have some cleaning up to do.

You may remember we reviewed Konosuba 2 a few episodes back, having forgotten to review it after the series conclusion. Unfortunately, these two shows, like Konosuba 2, seem to have slipped through the cracks, and despite reviewing them at the halfway point here, we never wrote a concluding review at the end of these series! I’m basically putting these in so they can be included in the Anime Rankings.

Akiba’s Trip was a fun adventure, but it never really kicked on from the halfway point. Like with so many other anime action-comedies, as it got more serious, it almost went backwards in terms of quality. However, it kept hold of that happy-go-lucky feeling throughout, and I would definitely recommend it to hardcore anime fans. ANIME RANKING: #42 – An okay score, sat next to equally colourful series Kiznaiver, and ahead of shows like New Game and Fuuka!

Masamune-kun’s Revenge, however, is the definition of a series ending abruptly. I said in the halfway review that it would be a series that flies or dies depending on its conclusion, and by reaching no conclusion whatsoever, the series, however funny and effective it was at the start, feels something like a moot point. ANIME RANKING: #52 – Really not great, and not worth your time.

Anyway, onto this episode’s main reviews, starting with an anime from someone whose work is currently sitting in the Elite 5 here at The Culture Cove! 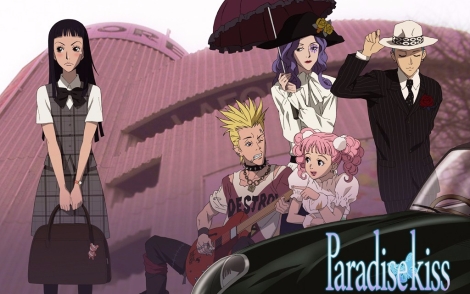 The story follows Yukari Hayasaka (left), a plain girl from an illustrious high-school. She spends most of her time studying for the upcoming entrance exams, but is growing restless over her repetitive existence, feeling as if she’s missing out on life itself. One day, while walking down the street, a shady high-school boy walks up to her and asks if she will be a model at their fashion show. Startled, she runs away, only to be kidnapped by an extravagantly dressed woman. Yukari is taken to a hideout in the city, where the group introduce themselves as junior designers studying at an art school. They ask Yukari to be the model for their label, Paradise Kiss, in the upcoming show, and despite being against the idea at first, she finds herself in awe of the group’s ambition, and particularly their enigmatic leader George (far right). Yukari agrees to help the four of them, and their way of life begins to change how the uptight honour student views the world around her.

Basically Plot: An uptight bookworm girl disenfranchised by her robotic high-school life is suddenly dragged into a fashion world full of dreams and eccentricity by a charming man and his passionate friends.

Paradise Kiss is adapted from a manga series written by Ai Yazawa, who is the person behind one of our favourite series of all time, Nana. These two female-led shows share a similar sense of style and a love-comedy balance, however there are some surprisingly distinct differences that set Paradise Kiss apart from its hugely successful sister.

While not necessarily a well-animated show, Paradise Kiss is certainly a beautiful series to look at. Overflowing with immense creativity and plenty of western influences – including a Franz Ferdinand outro song – Paradise Kiss, much like Nana, is a show that is just a pleasure to watch. The characters are drawn with thick and straight lines that remind you somewhat of the stereotypical chiselled cheekbones and perfectly engineered faces of the modelling world, and it creates a strong sense of powerful elegance about the characters. The story, however, is a little on the thin side. The twelve episodes follow-up to the modelling show mentioned from the start, and while there is some personal development along the way – although that could have been done better, also – the story itself is simple. For the most part Paradise Kiss gets away with this, as I flew through the first half of the series in a wave of fashion, colours and incredibly lively characters. However, at the end of the series I couldn’t help but feel that the actual story could have probably been told in 3-6 episodes, let alone 12.

That being said, Paradise Kiss is definitely a good series that is a must see for fans of female-led romantic stories. With a strong sense of style, creativity and rebellion, there is plenty going for this series, so much so that it pretty much gets away with what is a very basic story!

ANIME RANKING: #28 – A very strong score for this series, putting it in between other hugely successful series such as Wagnaria and Acca-13!

If you liked this you’ll love: Nana – Of course this goes without saying, but if you enjoyed this series, you should definitely check out Nana. Based off of Ai Yazawa’s most successful manga series, this story of love and friendship not only shares a similar rom-com balance but also a beautiful style of animation that you’re sure to love. 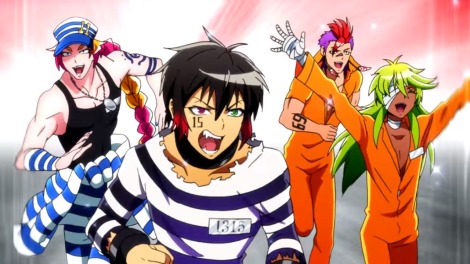 A combination of the words Nanba (number) and Baka (Japanese for idiot), Nanbaka follows the guards and inmates of Nanba prison, a secret island prison of the coast of Japan, the most impenetrable and inescapable prison in the world. The story focuses on the four inmates of Building 13, Cell 13: Uno (far left), a kind British man obsessed with gambling and women; the childish Nico (far right), an effeminate American man and ex drug addict who loves anime; Rock (right), a large man who loves good food; and Jyugo (front), an easily bored young Japanese man with almost impossible lock picking skills, and a dark past that begins to unravel in front of them.

Basically Plot: Comedy series following the actions of four colourful inmates in the world’s most formidable, and eccentric, prison.

This was a solid series. At the beginning, Nanbaka is a funny series with fantastically vibrant colours. On that note, Nanbaka is comfortably the most colourful anime I’ve ever seen! For a series set in prison, and a story that can be quite violent at times, to include so many vibrant colours without looking ridiculous is quite an impressive achievement!

I was surprised at how long this story was. This never felt like a show that would go over two cycles, and I found myself going off it slightly in the second half of the series. A lot of comedy series struggle at the end of their shows as a story is forced to develop and irreverent laughs take a backseat. However, Nanbaka does a better job of overcoming this than most. Despite having that classic manga adaptation problem of a main story that seems to never stop changing or losing focus, what story that does form is not bad, and replaces the comedy aspect with a decent substitute, superpowered fighting.

Overall, Nanbaka is a really good show! Obviously it lacks the drama and expert storytelling of major shows, but in terms of simple and honest comedy, I can’t think of many that are as all-round good as this series!

ANIME RANKING: #36 – A decent ranking for a decent series. Nanbaka sits just behind comedies such as No Game No Life and Konosuba, and ahead of shows such as Flip Flappers.

If you liked this you’ll love: Kivnaiver – It really depends what you’re into – if you enjoy the childish comedy side, then there’s plenty of shows such as Wagnaria and Konosuba that cater to that. However, if you prefer the second half’s action conclusion to this series, that actually has a lot more in common with Kiznaiver. An equally colourful series following a group of misfits forced together, Kiznaiver is primarily an action series, but is light enough and has plenty of comedy to cater to fans of Nanbaka. If you enjoyed the conclusion to Nanbaka, you’ll love Kizaiver!

Paradise Kiss is, so far, the best example I’ve seen of the ‘spin-off’, to put it vaguely: a series that is by someone or a group that have also done a similar show in the same genre. It’s hard for someone, or a group, to do two different shows and make them both stand on their own feet – I think of Kabaneri of the Iron Fortress (by the team behind Attack on Titan) as an example of this going badly – however, I’m currently watching Sword Oratoria (a spin-off to comedy series ‘Is it Wrong…?’), and alongside recent comedy Koro-sensei Quest, both of these look like good examples of how to take a successful idea and make it completely fresh again!

Make sure you follow The Culture Cove to see the best anime reviews before anybody else! Look out for episode 31 of Anime Pocket Reviews, featuring the hugely popular comedy series The Devil is a Part-Timer!