Your Name (Kimi no Na Wa)

Written and Directed by Makoto Shinkai

The sensation that rocked the anime world, Your Name broke records with a sense of effortlessness, taking the industry to new heights both abroad and in Japan. It took a while, but I finally managed to get my hands on it, and then find the courage to look beyond the titanic hype that surrounds it and simply sit down and watch it, and I must say, Your Name is a wildly different film than I had imagined.

Kimi no Na Wa follows the lives of two high-school children. Mitsuha is a girl born and raised in a small countryside town in the mountains. She is the daughter of the local mayor, and works as a shrine maiden in the family’s temple. While she has close friends, she is sick of her simple life, and wishes she was born a handsome boy in Tokyo. Then, one day, she finds herself in the body of Taki, a high-schooler living in the centre of Tokyo. Taki also wakes up in Mitsuha’s body, and the two of them soon discover that they are randomly changing bodies with eachother. The two of them learn to act out their new lives, leaving notes behind for the other, and slowly, the two of them begin developing a deep connection.

At first, Your Name actually had me slightly worried. I had waited for so long to watch it, and when I did, the film’s opening is actually no more than okay. Creator Shinkai, at first, plays this story as a simple rom-com, with the two of them having fun with each other’s lives, working together to make sure nothing is too messed up for the other, and slowly falling for each other. While, in reality, this romantic comedy element was played very nicely – the film has great pacing throughout, with Shinkai giving time to each scene and event instead of rushing to a certain plot point – it certainly didn’t have much weight to it at the beginning, and with little evidence to suggest any sort of twist I was left wondering if this was all there was to it.

However, a twist sure enough did come, and when it did, the story morphed, and I begun to understand the hype.

Your Name, while cute and fun at the beginning, develops into an incredibly deep story about time and love. As they dig deeper, both of them begin to discover the gravity of what is going on, and the story ends up taking a very dramatic, very psychological and almost epic nature. However, what makes this film so great is that, even as the story turns into one about life and death, there is still a very human element to it. Even as the characters delve into the mystery behind their powers, the romance element is never lost. It would be easy for Your Name, with its complex sci-fi story, to turn into a full-blown mystery movie, but Shinkai does a fantastic job of keeping that romance aspect at the forefront, giving the film a really special feeling. That’s the only word I can think to describe it, a ‘feeling’; Your Name is probably the first film ever where I have found myself genuinely wanting the two characters to have a ‘happy ever after’.

The animation, funnily enough, is nothing too special. Of course, it is to a good standard, but is not much above what you would expect to see in major romance anime TV series, except for a few scenes which have obviously been given special care.

The directing by Shinkai, though, I could not speak high enough of. Thanks to him also being the writer, you really get a sense that he is in complete control of what you are thinking. The images and script work hand-in-hand, accompanied by the aforementioned excellent pacing which makes an incredibly complex story seem effortless and a pure joy to watch.

Something that was said a lot after this film’s release, as the praise begun to rain down, was that Makoto Shinkai would be Japanese anime’s next Hayao Miyazaki, the famed founder of Studio Ghibli who is now slowly taking a step back from the forefront of Japanese animated films. Shinkai himself admits that these claims are a bit overstated, and after watching this I feel the same way. Your Name doesn’t feel at all like a Ghibli-style film, nor does it feel like the director could produce one. That should not be seen as a criticism, just that, ultimately from the evidence of one film, Shinkai is a very different individual to the type that creates the slow, poignant pieces of Studio Ghibli.

There is an argument to say that Kimi no Na Wa, with its record-breaking cinema run, has been somewhat overhyped. In fact, I think the hype probably ruined the first 20-30 minutes of the film for me. However, looking back at the whole film, I think Shinkai deserves every bit of praise placed upon him. The story takes a while to really get going, but when it does, Your Name develops into a tale of grand proportions, mixing epic narrative and huge ideas with a heart-warming teen romance to creating something truly special. 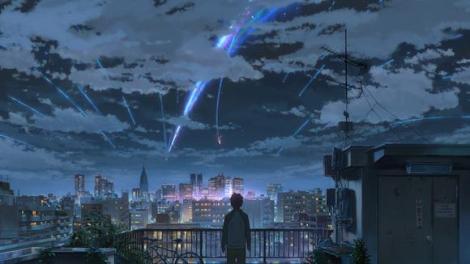 The next Miyazaki? Unlikely.

The future of Japanese animation? Probably.