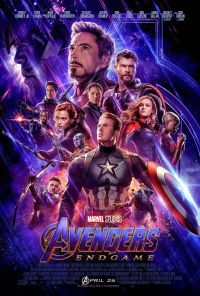 Directed by Anthony and Joe Russo

The long-anticipated final saga in a film franchise that has delivered over a decade of almost faultless cinema blockbusters – could Endgame live up to the almost insurmountable expectations of a moviegoing generation?

Set after the events of Avengers: Infinity War, Captain Marvel saves Tony Stark and Nebula from deep space, reuniting the remaining Avengers for a push against Thanos. However, when they find him they discover he has destroyed the stones, removing any chance of reversing the doomsday-like events that occurred. Five years later, however, Ant-Man returns from the quantum realm. Believed to have died in the events concluding Infinity War, his survival points to the solution, using the realm to travel back in time and retrieve the stones. Split into groups, the remaining Avengers must step back into famous scenes from their past to retrieve the stones and stop Thanos from wiping out half the world.

Given how much this film means to some people, it’s important to clarify that we are far from being Marvel superfans. Like many people, we have thoroughly enjoyed all the Avengers films – see our Infinity War Review – but outside that, our interest in Marvel is minimal. Thankfully, the majority of this film does exactly what has made the Avengers some of the best blockbusters of the 21st century. The most enjoyable feature of almost all these films has been the fantastic balance between cool, dramatic superhero monologues and simple comedy that provides some much-needed energy into Endgame’s sizeable runtime. Going into it, I felt like the three-hours would be slightly too long, especially for someone who hasn’t followed Marvel religiously – we hadn’t seen Captain Marvel previously, for example – and while there were a few moments that dragged, the majority of the film was enjoyable.

This success is, of course, a lot down to the unbelievable arsenal of characters and actors that Marvel has built over the last decade and rightfully cashed-in on during Endgame. A whistle-stop tour of some of Marvel’s best movies during the first-half leads into an almighty battle at the end which shows the true scale of the studio’s productions, both in terms of the action and sheer number of characters involved. It is a giddyingly-good fight to watch for that reason alone, the number of exciting people enough to forgive the occasional strange development and slightly underwhelming conclusion to the warfare.

The direction in this film was pretty good, also. While it is worth arguing that it would have been hard to get this film hugely wrong – much of the leg-work being done over the last ten years – there are a few noticeable gems regarding direction and storytelling that make their work stand out. The same goes for the actors, many of them delivering solid performances in a movie that felt like a victory parade more than a changing of the guard.

It is worth reporting, however, that watching the film over a week after its release, with a group of people who liked but didn’t love Marvel movies, nobody in that cinema was calling it a masterpiece. If you look past Endgame’s very grand highlights and the sheer joy of seeing all the characters involved, many for the last time, you can understand why some people would be left slightly underwhelmed. For a film called Endgame, it did have a feel of the inevitable running through it and a lack of major consequential changes to the world – only two of the main characters died, for example – does soften this film’s appeal.

However, there is no perfect way to end a twenty-odd-film run and given the response by wholehearted Marvel fans and the general excitement about cinema that this created, Endgame can only go down as a success. Of course, the question will soon be what happens next! New characters will have to lead Marvel into the future and, given the success of the Avengers, you have to ask if characters such as Spiderman, Captain Marvel, Black Panther et al will be able to replicate this with a new audience. However, for now we can all just sit back and bathe in the afterglow of a superhero franchise that has transformed modern blockbuster cinema and has gone out with an almighty bang!