Welcome back to Anime Pocket Reviews, and a USA special!

This time we’re looking at two increasingly popular English-language animated series. Later on, we take a look at the latest iteration of the hugely popular RWBY series, but first, the second season of an up-and-coming sci-fi adventure. 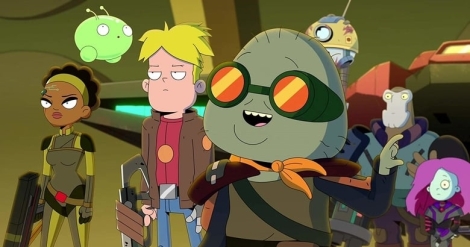 Set after the events of Season One, Gary (center-left) and the remaining members of his crew are left at the mercy of a maniacal collector (center) and his two superpowered children (right). If Gary wants to reach Final Space and save Quinn, he must collect the five dimensional keys, setting them on a journey across the galaxy which unearths many secrets about their past and potential future.

Final Space is one of what feels like very few western-produced animated TV series with a linear story*. Occupying something of a niche, this is an entertaining watch but struggles to achieve anything more than that.

As mentioned before, the western animation market is predominantly dominated right now by comedies, and Final Space seems to struggle with an identity crisis of its own for large parts. FS is a very entertaining watch, full of engaging characters and a bright, colourful world. However, scratch deeper and you realise that there’s not much else behind the one-liners and pretty colours. For the majority of this series, its story elements felt more bark than bite.

As mentioned, one of FS’s strengths is its characters. The show is full of exciting people who have clear, distinct personalities, and watching them click with each other is really entertaining. Little Cato, Nightfall and Ash are excellent characters, in particular. However – and there always seems to be a ‘however’ – the lead character Gary always feels like he’s lacking something. Out of all the characters, he is the one that feels like a vehicle for the story more than anyone else. Again, like the show itself, FS’s main characters feels like a collection of one-liners with a few story points added for good measure.

Overall, our opinion of Final Space comes back to the show’s aforementioned identity crisis. As a sci-fi adventure, the show delivers for the most part with a simple story, engaging characters and plenty of fun things to discover.

However, the show always feels like it wants to be an action-comedy, which then pulls it into the realm of shows such as Rick & Morty, which is considerably funnier and smarter than this offering. In the end, it gets stuck in a limbo which only serves to highlight its weaknesses on both sides of the coin. Final Space is a light, entertaining show with little competition, but in reality, it doesn’t have the story nor the laughs to be considered a great series.

ANIME RANKING: #95 – A slight drop in ranking for a series that fails to deliver much more than the basic expectation.

If You Liked This You’ll Love: Space Dandy (#29) – The funny but less successful cousin of Cowboy Bebop, Space Dandy is a space action comedy that manages to deliver on all counts. Full of adventure and over-exuberance, it’s a classically Japanese cartoon produced by one of the masters of animation.

*The irony is not lost that this episode also features one of the few other western-animated series with a storyline! 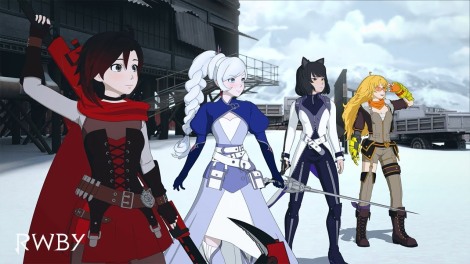 Set after the events of Volume 6, RWBY (pictured) and their group arrive in Atlas with the Relic of Knowledge and discover the world’s most important stronghold falling into disrepair. The people of Mantle are losing faith in General Ironwood, who tells RWBY about his plan to create a communications tower from which he can inform the world of Salem and unite everyone against her. However, political struggles threaten to derail his plan. As Salem’s forces begin to arrive in the kingdom, pressure begins to build and everyone’s beliefs are tested.

Basically Plot: The continuation of RWBY’s story and their fight against the all-powerful Salem sees them arrive in Atlas, a once-formidable city threatening to crack due to internal conflicts.

It almost feels like this series has been going on forever, now. RWBY 1 was one of the first animated series we reviewed here at The Culture Cove! During that time it has amazed and frustrated, almost in equal measure. Volume 7, perhaps expectedly, offers a bit of everything in a season that is great for the devoted fan but less so for anyone seeking something new to watch.

After a few series in a row of journeying and searching, Volume 7 is settled in its location, which leads to a more character-focused storyline. Despite this, it still feels like we’re not seeing as much progression from the main four characters as you would expect, a criticism we’ve labelled often at this series. On the other hand, V7 allows a much wider cast of characters to flourish, with Team JNR, the new Ace-Ops and the returning Penny particularly interesting to watch. In an action-packed conclusion, the returns of Neopolitan and Cinder were also really exciting.

As with previous series, one of the biggest pulls in Volume 7 is its visual style and the depth of its world. Each of the new characters delivers something exciting to enjoy, even if it is taking simple pleasure in new fighting moves. There’s pleasure for fans in gaining more of an understanding of what is, at this stage, a hugely expansive world during this time spent in Atlas and Mantle. The slight alterations seen in the aesthetic style of the main characters also breathe new life into a series that always seems to find a way of making a continual story feel like something new.

The problem is that, because it is so concurrent, it’s hard to recommend anybody who hasn’t seen RWBY to watch this series. As part of the overall story, Volume 7 felt like a bright and energetic addition with a political element that shone a new light on their world. However – and I think we’ve said this about other volumes – reviewing the series in and of itself is incredibly tricky.

Off the top of my head (and I’m writing this having just finished the series) I can barely think of a handful of moments that made you really sit up and take notice, particularly before the fight-heavy final episodes. In a small, 13-episode series a few moments can sometimes feel like enough, but it’s worth remembering that this show has a total runtime of just under four hours. It doesn’t feel like two feature-length film’s worth of content; in fact, I imagine you could halve it and get the same story across, potentially with more impact.

We’re still enjoying RWBY and we’re too far along to ever stop now, but as a piece of animation, can you say this is a good series? Visually, it’s a great example of what machinima can achieve with incredible creativity and attention to detail, and the sheer variety of characters always makes this exciting. However, overall the story doesn’t exactly blow you away and, perhaps more than in other volumes, this season does feel incomplete, with no huge conclusion offered.

Is Volume 7 an enjoyable watch for RWBY fans? Absolutely. Is it a good animated series? I think so, purely for entertainment value – but only just.

ANIME RANKING: #33 – A minor climb for a series that reminds you of RWBY’s best qualities, and some of its worst.

If You Liked This You’ll Love: Land of the Lustrous (#20) – In the past, we have recommended Akame Ga Kill as RWBY fans’ next series and that still holds true. However, for those that love the visual nature of RWBY, Land of the Lustrous is another series featuring sword-wielding heroines created in the 3D machinima style! With a more fantastical storyline, LotL is comfortably one of the most imaginative TV series of the last few years and something that everyone should be watching!

What are your thoughts on RWBY Volume 7? I would be particularly interested in hearing from fans that have joined at a later stage – how did you get into the series and do these later volumes work as individual viewing experiences? Let us know through our social media channels!

Subscribe to The Culture Cove for regular anime reviews and recommendations! Keep an eye out for episode 67, including our review of season four of My Hero Academia!