Here we are again: time for part two of our 30 Anime Review!

We’ve had some great winners so far – with shows such as Durarara, Akame Ga Kill and Your Lie in April winning awards. We’ve also had some surprises, with the comedy No Game No Life knocking blockbuster series Sword Art Online out of the awards!

If you haven’t seen Part 1 yet, check it out here!

Now, however, it’s time for the big awards. Best Story, Best Drawing and Potential Hollywood Success are just three of the seven awards up for grabs here. So, without any delay, let’s get started:

Best Fight Scenes in an Anime – Fate/Stay Night: Unlimited Blade Works
Without any serious competition from the latest fifteen anime, Fate deservedly retains this award. The speed at which these ‘superhumans’ move when in combat is spellbinding, and the show doesn’t just do it justice, it amplifies it with excellent angles and bursts of colour. I think Fate – by which I mean Unlimited Blade Works, not the whole franchise – is certainly worth watching simply to marvel at the speed and power portrayed by these fighters.

As was the case last time, Akame Ga Kill and Tokyo Ghoul both deserve mentions for their excellent fight scenes. Also, God Eater from the latest fifteen reviews has very good fight scenes, brought to life through its unique drawing style.

Best Comedy – Tanaka-kun is Always Listless
Another new award, created to celebrate some of the incredibly funny anime we’ve reviewed over the last fifteen shows! There’s so many funny shows in this 30 Anime Review, but one rises head and shoulders above the rest: Tanaka-kun.

Incredibly unique, Tanaka-kun has its own incredibly laid-back style that it sticks to throughout. However, the comedy is so natural and frequent that the repetitiveness just becomes part of its character, and it just makes everything that little bit funnier! Tanaka-kun is an incredibly relaxed show, and a deserved winner of this award.

As mentioned earlier, there are a lot of good comedies in the last fifteen reviewed. However, this was only really a two-horse race between the winner, Tanaka-kun, and No Game No Life, which is also an excellent comedy series with its own noticeable style that it passionately sticks with.

Best Drawing – Anohana
An award that was won last time by Attack on Titan, perhaps it is a sign of my maturing tastes that this award is now won by the excellent Anohana.

In my review I likened Anohana’s drawing to that of famed filmmakers Studio Ghibli; the way the drawings delicately balance detail and colour while also making the characters and environment completely natural is just marvellous. Natural is a big point here: I’ve seen a lot of shows that use bright colours but then come across as almost fantasy (Sword Art Online, No Game No Life), but Anohana uses those bright colours and portrays them so naturally you don’t even think of comparing them! An incredible effort.

Another show that can count itself unlucky not to win this award is Your Lie in April – a show with such emotive and beautiful drawing throughout, with a particular ‘extreme-detail’ style that works perfectly for the show. Nisekoi also has great drawing, particularly how it transcends styles, mainly for comic reasons; and Attack on Titan deserves a mention for its use of sharp colours and details. 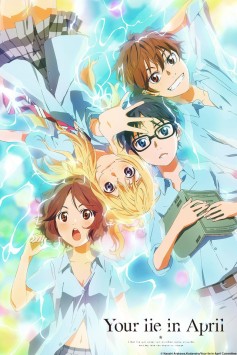 Best Story – Your Lie in April
There’s so many good stories in this 30 Anime Review, and at one point this award was a seven horse race. It then got pushed down to four, and then reluctantly one had to be given the award. It was very close, but Your Lie in April is a deserved winner.

I understand the risk of repeating myself here, after Your Lie in April won an award in Part 1, but the same arguments ring true here. This is an incredibly heartfelt tale, written in such a refined and intelligent way that I would definitely rank it as one of the most well-written stories I’ve ever seen, heard or read.

The other three final runners – each of which could have comfortably won this award – were 15 Anime Review’s award winner Durarara, the incredibly dramatic Code Geass, and the beautiful ‘coming-of-age’ tale Anohana. Tokyo Ghoul, Steins;Gate and Attack on Titan also deserve mentions in this category. 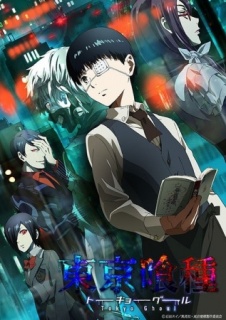 Potential Hollywood Success – Tokyo Ghoul
Again, at this stage of the awards and given the scope of the categories it won’t surprise you to hear that this was a very close category. I run it down to a top-three, but even under extreme pressure Tokyo Ghoul manages to retain its award.

Taking the abomination that is Root A (Season 2) out of the picture, Tokyo Ghoul presents an excellent base-idea that a triple-a TV series could be built upon. It’s just a really cool show, with excellent and exciting characters and a compelling war between different sides that I think would seriously appeal to the YA market. I would absolutely love to see Hollywood sink its teeth into this source material!

If any Hollywood execs are reading this, a safer but just as promising venture would be Anohana, which is already a fantastically heartwarming story and could make a very sophisticated teen movie. Your Lie in April could also be an exciting possibility thanks to its incredible story.

Best Mini-Series – Tokyo Ghoul (S1)
Yes, there has been some very good, very enjoyable series in the last fifteen anime reviewed, but when all is said and done it’s going to take something special to knock Tokyo Ghoul off of this perch.

Note: In case you’re unaware, we’re counting a ‘mini-series’ as any 11/12/13 episode series that reaches a conclusion during that time, or in which the second series is clearly separated form the first.

Tokyo Ghoul is a truly exceptional piece of entertainment. It perfectly captures the edgy, yet slightly dangerous feel most people have about the city of Tokyo, and uses that idea as a base for an excellent piece of what could be loosely described as YA dystopia. It has all the right ingredients: sides are picked, and the audience ends up siding with people they would have once been against; ideas and beliefs clash as groups fight for what they believe in; and all this is measured with more than a touch of diverse, exciting characters and excellent fight scenes. As mentioned before, it feels like something plucked straight from the western YA market, but the Japanese, anime edge makes it feel like something truly special.

As mentioned before, there has been some very good mini-series since we last handed out this award, but they are mainly comedies, and lack the dramatic, story-telling edge of something like Tokyo Ghoul. However, they are both worth mentioning here: special praise to both Tanaka-kun is Always Listless and No Game No Life, two incredibly unique, incredibly funny shows! Special mention should also go to RWBY, for how it manages to be such easy viewing yet have such a good story, and excellent fight scenes, I should add.

Best Anime
First of all, what an excellent set of shows we have here! Out of the 30, there’s probably at least fourteen that I loved, and if I could recommend them all I would! However, there’s one that stands head and shoulders above the rest: It’s a retention again. The Culture Cove’s 30 Anime Review’s Best Anime is Attack on Titan.

What an excellent tale this is; a staple for Japanimation. It does things that just wouldn’t work using live-action (as has been proved by the lack of success of the live-action movies). It takes full advantage of the medium, creating menacing creatures on an epic scale. It balances this excellent action with an absolutely tragic storyline full of selfish interests, and also some of the most compelling characters – such as our Best Female Side-Character Mikasa – you will see in anime. This is a worthy winner, and it will be extremely hard for anybody to topple this.

As was the case in 15 Anime Review, this has been a hard-thought award. Praise should be unreserved again for Durarara, which is a completely unique story incredibly told, and a real favourite of mine. Last year it was a two-horse race, pretty much, but this time more shows have put the pressure on AoT. Special praise also goes to the beautiful Your Lie in April, which is just an incredibly well-told tale; and also to the incredibly dramatic and tension-building Code Geass: Lelouch of the Rebellion, both of which got seriously mentioned in the question this time around.

And that… that is all she wrote.

Attack on Titan and Tokyo Ghoul retain two of the major gongs from last time around, and it looks like it’s going to take something special to know them off that perch. Meanwhile, Your Lie in April has performed exceptionally well, probably the most successful of the last fifteen reviewed, and has nailed its place down as one of the best anime seen at The Culture Cove.

The 30 Anime Review may be concluded, but our celebrations are not finished just yet! Check out next week for our 30 Anime Ranking, where we order all our anime from thirty down to one, alongside what we’ve taken from each!

Thank you for reading our 30 Anime Review! Our next review will be at 50 shows – assuming we get there – so make sure you subscribe to The Culture Cove; because there’s plenty of anime still to come!