Welcome back to Anime Pocket Reviews!

TCC anime Rankings is now available here. I would love to hear your thoughts on where all our shows are ranked, as I’m sure there’s plenty of debate to be found in that list!

Onto the latest episode, and it’s a good one: later on we’ve got one of anime’s most respected horror series, along with the second season of one of our favourite comedy series! First up, though, is a series from earlier this year… 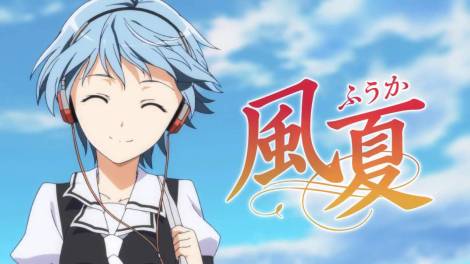 This story follows Yuu Haruna, a musical high school kid who spends more time on Twitter than in the real world, which is why he accidentally bumps into a girl named Fuuka (above). Busy on his phone at the time, Fuuka accuses him of trying to take a photo of her, and smashes his precious mobile. However, she accidentally leaves behind a CD, and after he returns it, the two of them hit it off. Finding out about their shared love for music, the two of them agree to start a band together with two other classmates. As they begin to make something of their band, their working and personal relationship is complicated by Koyuki, Haruna’s childhood friend, and now superstar idol, who reconnects with him over a promise they made together.

Basically Plot: Classic story of reclusive boy who finds himself jumped on, literally, by a free-spirited girl, and ends up forming a band with her!

This was a surprisingly nice series! I say nice before good, though. I don’t think I’ve seen any series that was so manufactured and unnatural before. The character Fuuka, while good, is almost fantastical, especially at the start. What stands out in this sense, though, is the story. The plot itself so forcibly manufactured it’s funny! The idea of Fuuka itself is actually very similar to the series Your Lie in April, but in terms of style of delivery, these two shows are on the opposite sides of the galaxy.

However, this is not a bad series, and this is where it gets interesting. Yes, Fuuka is a completely unnatural series, but it’s unnatural with the aim of putting a smile on your face. Everything falls nicely for the characters, and because the people – Fuuka especially – are so heart-warming, you can’t help but feel good for them!

When I think about this show, my mind keeps going back to the band One Direction. Yes, it’s a completely fake, factory-produced product made to steal your attention, but we let it happen and we love it all the same because it makes us feel a little better, seeing the world through rose-tinted glasses. Fuuka is One Direction – sugary goodness for the heart, if slightly rotting for the mind.

ANIME RANKING: #45 – Yeah, not a great ranking for this series. A decent hit of sweetness, but it would be disrespectful to series just below such as Kiznaiver and Aldnoah.Zero to claim that Fuuka is better.

If you liked this you’ll love: Nisekoi – While lacking that musical element, you will not find many more upbeat high-school series than Nisekoi. Starring a boy placed in the middle of an awkward love-triangle, Nisekoi swaps out that production sheen of Fuuka in favour of a more natural, yet incredibly funny series that still manages to deliver some teen truths along the way! If you’re a fan of teen-romance series, then this is the one for you! 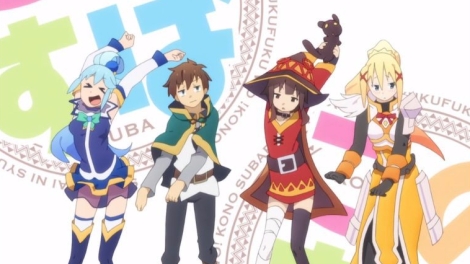 Following on from season one, Kazuma continues to be disappointed with his band of adventurers – Aqua, Darkness and Megumin – while trying to write off the crippling debts and criminal charges put against him because of his group’s actions.

I apologise in advance if this review appears a little thin. As I was stockpiling reviews to make room for our 52 Anime Review celebrations, it appears that I forgot to write a review for this second season! Konosuba’s second season was reviewed at episode 6 as part of our Winter ’17 Half-Term Report, and my thoughts on the series remain the same.

The fact Konosuba slipped past my mind is not just down to my negligence, though. Konosuba’s second series, while still as funny as the last, ended really abruptly. This has to be one of the smallest series I’ve seen at ten episodes, which in my mind is almost ridiculously short. The story just seemed to stop. Yes, thinking back there was a ‘boss battle’, but not at any point did it feel like the conclusion to a series. However, its ability to pick up from where season one left off, and still be as funny and original as it was, offsets the disappointment of the mini-series.

Anime Ranking: #30 – No change for Konosuba, as it retains its very respectable place ahead of shows such as Flip Flappers and fellow fantasy comedy ‘Is it Wrong…?’. That being said…

If you liked this you’ll love: Is it Wrong to Try to Pick Up Girls in a Dungeon? [Taken from S1 review] – An almost identical world and an almost identical idea of a wannabe-adventurer who’s seriously unprepared, assisted by people who should be more prepared but aren’t. The only real difference between the two is that Is it Wrong is more romantically inclined than Konosuba, and all together more serious, but both these series deliver excellent comedy in a fantasy world!

The story takes place in the small town of Yomiyama, following a mystery behind class 3-3 at Yomiyama North Middle School. In 1973, a young girl named Misaki, a hugely popular member of class 3-3, suddenly died halfway through the year. The class and teachers, overwhelmed by grief, pretended that Misaki was still alive and with them in the class, which lead to a mysterious presence appearing in their end-of-year photo. This story takes place 25 years later, when Sakakibara transfers into the cursed class 3-3, and is greeted coldly by his classmates. He finds himself entranced by a lonely girl called Mei Misaki, who sits at the back of the class and is completely ignored by the other class members, to the point that she may as well not exist. However, the closer he gets to her, the more hostile the class turns to him, and when a fatal phenomenon begins to rear its head once more, all the blame seems to lie at their feet.

Basically Plot: A boy transfers to a cursed high-school, and becomes close to a mysterious, seemingly invisible girl, just as the phenomenon begins…

I watched this as a challenge, more than anything else. I’ve watched a lot of anime now, and from what I’ve seen the medium’s biggest weakness is horror. I might do a bigger article on this, but I watched this after a recommendation in order to answer the question: can anime be horrifying? After seeing this, I still think the answer is no. That being said, there’s plenty going for this series.

While it’s not as scary as I was hoping, Another definitely has to be one of the most mysterious, and graphically violent anime series I’ve seen so far. The mystery builds really nicely – the cold nature of the class, and the question of whether Mei exists or not is well portrayed. The mystery, however, does appear to have some strenuous moments. It did feel at the end as if they had made up some rules as they went in order to help the story reach a conclusion.

I still can’t really decide how I feel about the conclusion to this series. The mystery builds slowly throughout the show, until the last two episodes, which hurriedly bring the show to a finish in a classic ‘battle royale’ style sequence where almost everybody dies (despite the story claiming only eight-or-so actually died; I’m convinced there were more). I should point out quickly that this is adapted from a modern Japanese novel of the same name, so the blame here doesn’t lie with the anime producers trying to cram it into a 12-episode slot, I assume.

On one hand, it would have been nice to see the mystery develop more, and reach the more sophisticated, less cliché conclusion that I felt we were being led towards. However, in terms of excitement, I don’t think I’ve seen many episodes as exciting on base value as those two! Also on that note, this series is well animated, and contains some awesome direction, with fantastically dramatic shots creating many memorable scenes.

Overall, I would highly recommend this series. It’s more of a violent mystery as opposed to a horror story, but the mystery is good, and its unyielding nature turns what looks like a stereotypical high-school anime into a really exciting, and very mature mystery series.

Anime Ranking: #23 – A top-half finish for the popular ‘horror’ series, placing it ahead of the excellent Fate series, and just behind hits such as RWBY and Bungou Stray Dogs!

If you liked this you’ll love: The Lost Village – While not necessarily at strong and horrifying as Another, The Lost Village is another mystery-horror series that places the characters in the middle of a life-threatening, seeming uncontrollable phenomenon, while also having a lead character who becomes associated with the mysterious girl of the piece. If you loved the mystery behind Another, you won’t be disappointed by The Lost village!

I feel like I’m repeating myself too many times, but I feel like it’s something that I really need answering. Is anime, as a medium, unable to effectively create horror stories? Another tried to be a horror, especially at the start, but eventually folded and became a bloody mystery, ending with a classic battle royale a la the Fate series. Maybe the characters are too cute in nature to terrify consistently throughout a series? Let us know if you’ve found a genuine, good horror anime! 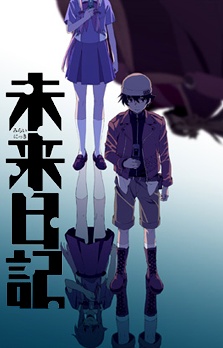 Make sure you follow The Culture Cove to see the best anime reviews before anybody else! Look out for episode 28 of Anime Pocket Reviews, featuring psychological thriller Mirai Nikki/Future Diary!