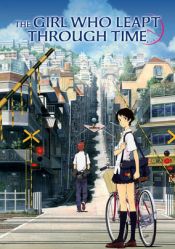 The Girl Who Leapt Through Time

Loosely based on the classic Japanese novel of the same name, the story follows Makoto (Naka), a simple, middle-of-the-road high-schooler who most enjoys spending her time playing baseball with her guy friends Chiaki (Ishida) and Kousuke (Itakura). On one particularly bad day, while running errands across the school, she inadvertently falls upon a walnut-shaped object. On the way home, while riding her bike down a hill, she discovers the brakes do not work, and she goes hurtling across a railway crossing and straight into the speeding train. Except that she wakes up just minutes before it. Makoto discovers she has inherited the ability to literally leap backwards in time, and begins to use it to get the most out of the simple pleasure of her adolescent life. Then, Chiaki asks her out, and while she rewinds to before that point, she soon discovers the perils of her manipulation of time.

Well, how long has it been since we did a film review?! Too long, I say.

I’m going to try to bring these back, starting with something natural to me – animation – and hopefully bringing in more traditional films in due course. It’s been ages, though, so I might be rusty, but here goes!

There is plenty of time-travel stories out there at this point. Even if you exclude stories involving more long-term time-travel, there is still far too many of these types of stories, probably. Still, The Girl That Leapt Through Time may have stiff competition, but with a traditional Japanese twist it certainly brings something new to the table.

The story is a classically Japanese-style take on the time-travel story. Thanks to our burgeoning love of Japanese anime, we have grown some sort of seventh sense when it comes to Japanese stories. A western take on this story would, normally, lean much closer to the sci-fi and fantasy genres. However, TGWLTT is much more of a slice-of-life romance film, the sci-fi time-travelling story acting as a medium for the movie to explore teenage themes such as first love, missed opportunities, the fear of mistakes and, finally, how life moves on – the English phrase ‘Time waits for no one’ features prominently through the film. Unfortunately, when you drag this film’s story back to its bare bones – the simple teen slice-of-life film – it does come across as a little light. TGWLTT’s best trait, though, is its timing. Not only does it have a perfect runtime – I hadn’t watched a film in ages before this, but it never felt like it was dragging, and the ending seemed to arrive at a perfect time – but its timing in terms of the feel of the moment was particularly impressive. It knew when it was right to be funny, particularly early on but also in later moments, and it knew when the jokes needed to stop, which worked really well for the poignant moments of the film.

Makoto is a wonderful character, voiced extremely well by Riisa Naka. From the start she’s called an idiot by seemingly everyone, and she certainly is, but that is what makes her lovable. Supported by the simple animation style of the film, Makoto, with her incredible clumsiness and love of simple moments like throwing a baseball around, is an incredibly human character. Her faults are open for all to see, and quickly become the core to the whole film. Her moments of pain late on wouldn’t work without the clownish nature beforehand. The voice acting throughout this film was to a pretty good standard, especially early on in the movie.

The direction in this film was okay. Hosoda’s work s director was pretty unremarkable, but that’s exactly what a film like this needed. Everything in The Girl Who Leapt Through Time comes across as very natural, not forced or polished for cinema, and the animation style feeds into this perfectly. Even compared to other film and TV Japanese anime I’ve seen from the same period, TGWLTT seems to be intentionally simple. The character’s lines are minimalist, the colours simple blocks with such little shading that at first it struck me as a bit cheap, but in the end you realise that it is simply trying to keep the movie as pure as the characters and the story. The movements of the characters can come across a bit clunky, especially in more dramatic moments where you would want to see fluid actions, but again this ‘amateurish’ trait just adds to the film’s charm.

Overall, while this film in the grand scheme of things doesn’t necessarily offer anything remarkable, or an individual trait that makes it a must-watch film – like many of Studio Ghibli’s works – The Girl Who Leapt Through Time is a pure and honest story that simply tells its tale, at its own pace and in its own way. Fans of Japanese anime will thoroughly enjoy the film’s simple, nostalgically Japanese style, while this film will also appeal to wider fans in search of a more honest, Holllywood-less coming-of-age tale with a twist.

What did you think of The Girl Who Leapt Through Time? Did you enjoy the film’s casual animation style, or were you disappointed in the type of nonchalant story it became, particularly during the middle parts? Let us know below, and subscribe for more film and anime reviews!