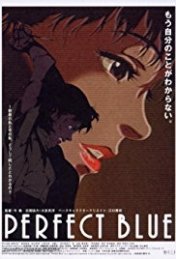 Based on the novel Perfect Blue: Complete Metamorphosis (1991) by Yoshikazu Takeuchi.

Perfect Blue follows the career of Mima Kirigoe, singer for the Japanese pop-idol group ‘CHAM!’, until she decides to leave to pursue a career as a recognised actress. The decision upsets some of her fans so much that she begins receiving personal threats. She finds out about an internet page called “Mina’s Room” that claims to be written by her, featuring a diary that details every step in her life, including which foot she steps off the train with. As she begins work on detective thriller ‘Double Blind’ members of her agency and the crew on the show begin to be attacked and murdered, and as Mina’s role in the TV show becomes darker and darker, and the stalker gets closer and closer, she begins to doubt everything, losing her grip on what is real and what is not.

This was something of a personal adventure for me. I was instantly won over by the visuals and the idea of an anime psy-thri movie, but more than anything what interested my was the red circle in the corner. Yeah, I say it every time, but we’ve watched one ton of anime now! It’s close to the point where we’ve seen everything to be offered from the medium, now, but there’s one thing that had always played on my mind: a lot of anime are aimed at kids but appeal to a wider audience. Perfect Blue is a full-blown 18/R-rated movie – this is an anime designed purely for adults, and it certainly plays out like one.

The story of Perfect Blue felt like it was taking a while to get going – which worried me at first given this is a movie with a runtime under 90 minutes. At the beginning the main character seemed strange when she had no reason to be, and the story itself felt quite manufactured and fake. Over the course of Perfect Blue it does a pretty solid job of exploring scenes of personality and who you should be in the eyes of the public, particularly as a celebrity, and in ourselves. However, when the film hit its psy-thri rhythm in the 3rd quarter it got really very good.

The psychological-thriller element of this is strong from the start, but when enough seeds of doubt are placed in the audience’s mind the film really begins playing with ideas and meshing scenes together in ways that are confusing and exciting in equal measure. There’s enough red herrings and mysteries in Perfect Blue to keep even the most hardcore fan satisfied – it is one of those films that you almost want to see a second time just to understand everything that happens. However, on a personal note I did find it weird and out-of-touch that the film appears to have a happy ending, although I’m sure there’s a theory online somewhere that flips that on its head.

Perfect Blue is an excellently directed film, although I can’t believe that would be all down to the face of the film, Satoshi Kon. Much of the success for this film is how the scenes and script lines all mesh together, not just her off-and-on-screen life but also how time is manipulated, and that has to be down to a really connected performance between director and writer. While that is excellent work by both Satoshi and Sadayuki, Kon does deserve singular praise also for the general feel of the film through some excellently chosen shots that gave it a real cinematic feeling.

The animation in Perfect Blue is probably my biggest question mark after watching it. Obviously you can only work with what you have – this is a film from the 1990’s, and this film’s animation looked in keeping with other series from that time that I’ve seen. However, I can’t help but feel like this would have been a much better film with today’s level of animation. While the scene-changing and general distress and discomfort of the character works well, in some of the more suspenseful moments you can see where the sound and the images are slightly off each other, sometimes in terms of timing but more in terms of just visual expectations versus what you actually hear – a ‘Kapow’ effect, if you like. Also, the use of colour in this film could have been better – a lot of characters and particularly backgrounds are drawn in dull and uninspiring colours, not the type of thing that you would hope to see in a psychological film.

At the end of the day, this is a fantastic example of a psychological-thriller that ends up destroying – or nearly destroying – the innocent main character. A few years ago, as Black Swan was getting critical acclaim there was a lot of talk about its director Aronofsky, who supposedly brought the rights to PB to recreate one of the scenes, potentially ripping-off this movie. More than anything, though, this film reminds me a lot more of The Neon Demon – a beautiful and modern western psy-thri with themes of innocence that had problems but was visually stunning. If Perfect Blue was remade with incredible lights and effects akin to Nicolas Winding Refn’s work, this would be one of the great anime films (nudge back to Black Swan here), and while I’m sure there will be some viewers who find a sense of twisted nostalgia from this, I can’t help but feel that Perfect Blue has been held back from its true potential by the technology of the time it was born into, which is incredibly unfortunate.

What do you think of Perfect Blue? I’m sure you’ll agree that this would be a fantastic remake, but we have two further questions. First, who directs the remake? Secondly, are you picturing a live-action, CGI-heavy remake, or a modern Japanese anime retelling? Tell us your thoughts by starting the discussion below, and subscribe for more movie and anime reviews!