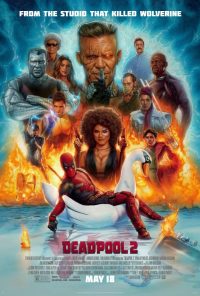 Following on from its smash-hit debut, Deadpool is back with the fated second album. At a heated time for blockbuster movies – its release pitting it against films such as Avengers: Infinity War and Solo: A Star Wars Story – this once small-time action-comedy has a lot to live up to not just in the past but also in the present.

Following on from the first film, Deadpool (Reynolds) is living the superhero lifestyle, taking down heavy criminals across the world. However, when it all comes crashing down he finds himself at rock bottom next to Russell (Dennison), a mutant teenager who struggles to deal with his abusive past. Despite his desire to be done with his superpowers, when the gun-slinging mercenary Cable (Brolin) comes for the teen’s head Deadpool finds himself compelled to save him.

I recently watched the first Deadpool for the first time, and I mentioned during that review that I felt like the film hadn’t particularly aged well, and that the hype somewhat overshadowed it nowadays. That thought is evidenced further by the fact that, having seen this film in cinemas relatively early in its lifetime and having avoided any reviews for it beforehand, I enjoyed Deadpool 2 much more!

It feels like there’s more of a story this time round, which for me is a big plus. The comedy, as you can expect, is incredibly funny – there’s no let up from the first one, the jokes pretty much along the same lines as the first film but with a bit of a modern freshness about them – but it’s the presence of a developing, comparatively complex and weighty story that, for me, sets this apart from the first film. Also, all the side characters are given much more of a say on the jokes than they were in the first film. Domino was a fantastic inclusion to the film, even though I would like to debate the sensibility of the unbound nature of having ‘being incredibly lucky’ as a superpower, and while Cable wasn’t exactly the coolest or baddest villain you’ll ever see he certainly worked as a good counterweight to Deadpool. The only real negative I have is that I was never a fan of the kid – he just seemed like a very basic stroppy teenager character who I never either cared for or took seriously.

It goes without saying that Ryan Reynolds steals all the headlines in this film – it is basically his own movie, after all. Josh Brolin delivers a solid showing as his reverse, but out of the rest the standout has to be Zazie Beetz as Domino. She looked so at home on that stage, taking an interesting character and making her the next best thing after Reynolds himself. Brianna Hildebrand also deserves a quick mention after delivering quietly impressive performances in both films but particularly this one.

The direction in this film is really good. While not doing anything particularly outstanding during normal scenes Leitch, with a career beginning in the stunt world, creates some really compelling fight scenes, particularly during the latter stages of the film.

Overall, after the last Deadpool film there was always a risk that this could go wrong, even if nobody really believed it would. In reality, Deadpool was always going to be in safe hands, and this second instalment in fact builds upon the success of the first one by supplying more of the same. However, balancing the excellent style of humour with a genuine superhero movie storyline is what makes this a much more enjoyable movie experience, a superb film that deserves as much praise as its ground-breaking debut!