Over the last two weeks I have been invited to two concerts – now, I went to the first one and thought about writing about it but didn’t have that much to say. However, having been to another one Friday evening I feel like I have plenty to talk about! So, here is my review of the live performances of three groups – Jungle, Mini Mansions and Royal Blood.

This was a very small, very chilled but very enjoyable gig! The Albert Hall is a beautiful old venue and is very compact, a great place to go and watch good music. Jungle are not the biggest and loudest of groups in the UK and as such a lot of people didn’t know all of the music, but the songs that were widely known got a great reception! Jungle are also one of those groups that sound much better live, tweaking their songs for the concert and adding extra lines and riffs to keep the vibe of the song going past it’s end – almost stretching their relatively small playlist to the limit!

If you want to jump and go crazy at a concert then Jungle isn’t that. However, if you’re a fan of their music then you have to go, because it is even better live! 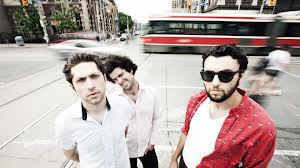 The opening act for Royal Bloods gig at the Empress Ballroom was LA band Mini Mansions. I’m fairly sure nobody had a clue who these guys were, and I have no idea if they are big or not in the States, but all I could think at the beginning was “how on earth does a band from LA end up playing in Blackpool?”, it’s a small world. Even though Mini Mansions fanbase would be very different from the rock fanbase of Royal Blood, they did slowly win the fairly sized crowd over, including me! It is also worth mentioning that after the Royal Blood gig was finished, Mini Mansions were by the exit selling their own merch! Awesome touch.

I also want to mention how beautiful the empress Ballroom is! Such a wonderful place to have concerts. 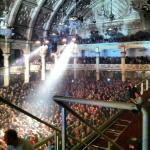 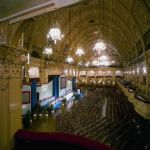 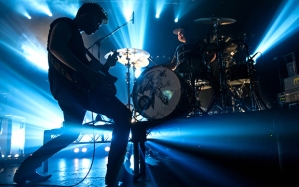 This is not at Blackpool, but the setup was the same as here!

A gig that sold out within two minutes (TWO!) back in 2014, the anticipation was palpable and almost bubbled over by the time Royal Blood made their way to the stage. As one of the biggest rock bands to come out of the UK in recent years, they already have a passionate following, and all that energy was let out after an electric start. Because we were there for the openers, we were lucky enough to be almost exactly front and centre, which was an incredible experience! The crowd was bouncing, sweat and beer filled the air and stained my shirt, and most importantly the music was excellent – albeit not at all different to listening to their album really, really loud.

All in all, an excellent rock gig experience, however they do not vary their songs at all from what is on the album which is something I see as being an important part of the live gig experience.

Share with us your experiences! What’s the best gig you’ve been to in recent years? Is it important that groups change up their songs for live performances? What’s the best venue you’ve ever been to? Tell us, I’m personally dying to know!

Also, if you regularly go to concerts, big or small, and want to share you’re experiences with the world then get in touch!