We’re back! After a fairly long wait it’s time for the unluckiest episode, number thirteen. Keep your fingers crossed for us…

A quick note: I know I said at the end of episode 12 that we would be reviewing Clannad, and here is episode 13 and, no Clannad. I honestly expected it to be really good, but Clannad just didn’t sit with me – perhaps due to its quite airy plot and lack of any real substance.

This is also a good time to say that this isn’t the first anime series I haven’t completed – I had similar problems with other reputable shows such as Parasyte, White Album and Nobunagun, to name a few.

However, rest assured I have some absolute gems here, including what could possibly be one of the best anime I’ve ever seen. First of all, here’s one of the most unlikely successes…

The story follows the normal lives of a handful of high-school students. The story centres on Tanaka (right), who as the title suggests is listless: “someone lacking energy or enthusiasm.” Tanaka-kun is always exhausted and is often dozing off, putting his life in the hands of his best friend Ohta (middle-left, sat down) – a model student who carries him around and generally looks after him throughout the day.

This is such a simple show that I even think the description I’ve given above is a bit excessive. It’s a sit-com, basically, in which we watch normal days unfold through the eyes of a character who is incredibly tired constantly. However, the character is so unique that I could have easily watched 100 more episodes of the same thing, just to see more of the world through his eyes. It’s a show that knows its simplicity and just runs with it. That being said, the downside of that is that if you don’t click with episode one, then you won’t get on with this show, because there is no serious development in characters or plot, and the whole series just follows the same pattern throughout. However, I couldn’t stop smiling throughout each episode. The simplicity, and the way it doesn’t ever force anything, helps to create quite a unique and laid-back experience.

Tanaka-kun is the star, the name and the cover, and everything in the show is made to compliment him perfectly. The theme-tune is calm but with a happy-vibe; the drawings are all soft and simple, with cool colours; and the side-characters (minus the energetic Miyano) are all relaxed people. Everything is singing from the same sheet, creating an incredibly light, easy watched and thoroughly enjoyable anime!

If you liked this you’ll love: Shiro Bako – Again this is a very unique show, so it’s hard to find an exact recommendation for it. Tanaka-kun is a unique character who can’t really compare to anything else I’ve seen. As a result this recommendation is a bit ropey, but it holds simply because this is another simple and laid back show whose plot isn’t necessarily that important. Shiro Bako, like Tanaka-kun, is just about getting along with the group of friends as they live their normal, happy lives.

An original story created for this anime series, Anohana centres around six childhood friends who become distant after one of them, the enigmatic Menma (top), dies in an accident while they’re playing. Anohana primarily follows Jinta (middle-left, red top), the leader of the group who is now withdrawn from society and no longer attending high-school. One day he is haunted by an older version of Menma who says that ‘Menma’ wants an unknown wish granted. With both him and Menma unsure as to what the wish could be, Jinta attempts to bring the group of friends back together. Having followed different paths since the incident when they were kids, Jinta struggles to convince the others at first, but they eventually – and somewhat reluctantly – decide to help find out what Menma’s wish is.

What a beautiful, well-constructed show this is. It’s hard to find anything else to start with really. The story is good, but almost takes a back seat and allows the characters to take centre stage. The characters themselves are really good: all of them are true, believable and with great depth. Depth runs throughout the whole show – the backstory almost becomes the plot for the show itself, and as the show carries on you begin to understand why certain things are happening, an example of great storytelling. It is worth noting, though, that a lot of the secrets are kept until the last two episodes, in which you do begin to feel slightly bombarded with information. These characters are not just deep thanks to the backstory though. The theme of this show is getting over troubled pasts, and all of the five (arguably six) characters develop, and you watch them look back on their lives and try to move on from their ‘mistakes’. It’s quite beautiful to see.

The drawing in this show deserves a special mention, as this might well be the best drawn anime I’ve ever seen! The colours are bright and with clarity, with clear and sharp outlines, but such care is taken with each frame and as such it never looks overly sharp, but instead holds a tranquil, almost human quality. I think the way the hair is drawn explains this point perfectly, particularly how Anaru’s (middle-right) red hair moves with her. The whole show just looked like it had been treated with the same love and care as any piece from the world-renowned Studio Ghibli.

This show really has blown me away. Everything about it is near-to-perfect, even its comparatively small length of 11-episodes. The story isn’t otherworldly, but is honest and dramatic in equal measure. The characters and drawings also fit that bill. Anohana is a delicately constructed masterpiece of tranquil drama, and is an absolute must-watch. That’s not just for anime fans, either. As mentioned before, this reminds me of some of the works by famous filmmakers Studio Ghibli, and would make a great example as to why anime doesn’t have to be as loud and childish as people believe it is.

If you liked this you’ll love: Your Lie in April – These two shows share the same delicacy, both in drawing style (although Your Lie in April uses softer colours) and story. They also both focus on getting over previous events in life – YLIA’s lead struggles with the death of his mother – and both shows are very good, very strong emotional experiences. 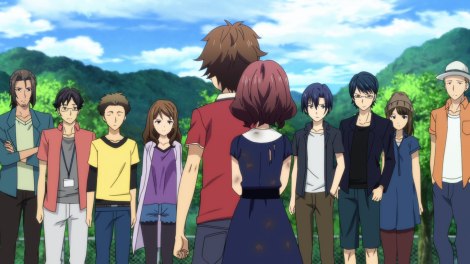 The Lost Village (S1, 2016, 12x25mins)
Mystery, Suspense, Horror
“We will now become missing persons and start over in Nanaki Village.”

The Lost Village follows 30 people on a shady bus tour to a place called Nanaki Village, an urban legend that is said to be a utopia that can’t be found on any map. All of the people on the tour are leaving their previous lives behind, for a multitude of reasons. The story follows Mitsumune (centre, back-facing), a young, gullible boy who becomes infatuated with the mysterious and defenceless Masaki (centre, back-facing). The group stumbles into a village left completely uninhabited, and led by tour guides Dahara (second-left) and Koharun they assume it to be Nanaki Village. As they begin to prepare for a new life people start to see monsters outside the secluded village, and as tensions rise surrounding the safety of their new location accusing groups start to form, causing rifts and divisions throughout the larger group as people look for answers.

NOTE: A few weeks/episodes ago we looked at some of this season’s biggest anime releases, including this show, at the half way point of their 12-show run. Since we’ve talked about this is a fair bit of detail already this will be a short re-cap.
Check out our special episode of Anime Pocket Reviews here!

Again, everything that I previously said still holds true at the conclusion. The Lost Village is a top-draw mystery series, with a plot so cleverly concealed and teased that only a handful of shows I’ve seen full-stop could compare to it. This is also another anime series that throws an awful lot of characters at you. While shows such as Durarara do this exceptionally well, The Lost Village struggles to give all of the characters enough screen-time to make them anything more than one-dimensional. Looking past the main characters, who themselves are not the deepest characters I’ve ever seen, there is a lot of almost wasted space.

SPOILER ALERT!
There isn’t much to say about the animation – it’s all very clean-cut as is the norm with modern-animation – but you can talk about the monsters. It emerges later in the story that the monsters that everyone sees are different because they are attached to the past they were trying to leave behind. Since these are figments of the imagination, the monsters in The Lost Village are portrayed in an almost CGI style and, believe it or not, are actually quite scary things and really help to create a sense of horror, albeit a sense that is quickly lost due to the shows focus on mystery.
SPOILER ALERT OVER!

I think that’s the main takeaway from this. Yes, it probably could have been more than it was: the characters are not great, and the show throughout almost refused to look at anything other than the plot. It follows the story almost to the expense of everything else, but the story is told in such a well-engineered way that this is easily forgiven. Definitely worth watching for fans of mystery and suspense shows, and is also just a great example of how to tell a story. My only disappointment is that this wasn’t a 24-show series, as that would have given this show much more room to really develop characters and become the truly astounding show that the base idea deserved to be.

If you like this you’ll love: Code Geass – Another mysterious and dramatic show with cliff-hangers and plot-twists aplenty, Lelouch of the Rebellion is a show I would recommend to you in its own right anyway, regardless of its similarity to The Lost Village. 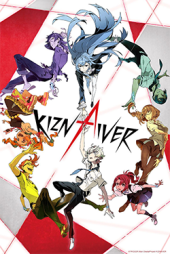 I don’t think that was too unlucky in the end, was it? Except missing Clannad of course. Past that, I seriously would recommend all of these shows, and Anohana is definitely one of the greatest anime series I’ve ever seen.

Make sure you follow The Culture Cove to see the best anime reviews before anybody else! Look out for episode 14 of Anime Pocket Reviews, featuring Spring 2016’s runaway success, Kiznaiver!