Time for episode 21! And I must say, on a personal level, this is one of my favourite episodes to date. I don’t remember many shows that I wrote so passionately about than these two. Later, we have a series that is full of regret for me, but before that, here’s one of the most unique anime experiences of the year.

Based of the manga written by ONE, the story follows Shigeo Kageyama (centre), a bang-average high-schooler who goes by the nickname Mob. Mob means ‘background character’ in Japanese, and the name suits him perfectly. However, despite his lack of presence, he is actually an extremely powerful esper, tricked into working for self-proclaimed but ultimately useless ‘psychic’ Reigen (bottom-left) at his spirit therapy business, as his understudy. After incidents when he was little, Mob has worked hard to control his emotions, and the uncontrollable, destructive power inside him that is released when Mob’s emotions reach 100. While he has had a strong grasp on it since he was a child, new threats from evil spirits, other psychics, criminal organisations and the general irritations of life start to put more strains on Mob, pushing him slowly towards breaking point.

There was a lot of excitement even before this anime came out. The original web-comic was created by ‘ONE’, a legendary Japanese storyteller who releases his works online, without a publisher. ONE is most famous for creating One Punch Man, whose anime series is widely seen as one of the best ever made. With source material from someone of this stature, there was a lot of expectation going into Mob.

However, it took me a long time to start watching this show. Initially I, probably like a lot of people, was put off by the extreme drawing style of Mob. I think the best way of describing Mob visually is ‘extreme detail’. The art brings out the grimy, unattractive parts of people in a similar way to what a caricature might do. Almost every character has beads of sweat on them constantly, and hairy chins and big warts are commonplace on characters throughout. There are no pristine, superhero-looking characters in this show, like you would expect to find in almost every other anime. This did put me off at the start, and I have a feeling that somebody told the team behind Mob to tone it down after a few episodes, because it was much less noticeable after the opening shows. Maybe I just got used to seeing it, but I have a feeling they did try to calm it somewhat.

What also surprised me, past the drawing style, was the tone of this show. I assumed going into it, given that this looks darker on the face of it than One Punch Man, that this would be a strange, ghost-based action show with a dark edge. However, this is a show that balances itself equally between action and comedy. Mob runs at a really fast pace, using the unique ‘ugly’ art style to move seamlessly between gritty action and irreverent comedy. Mob himself (and a lot of the other characters) sums this up perfectly – his constantly disinterested demeanour works well for his sensitive moments, but also helps deliver guaranteed laughs when he does something while being seemingly unaware of what he’s doing. It’s this type of moment, where a line or an action passes for both action, story and comedy, that makes Mob Psycho a success.

The other thing I like about this show is that it uses tried and trusted – aka cliché – storylines, but can pass them off as its own. Mob Psycho’s story completely debunks the theory ‘quality over quantity’. What it has done is combine multiple stereotypical plots – from the jealous brother trying to overpower his sibling, only to find out he honestly appreciates his own skills; to the powerful enemy who, when defeated, joins the heroes team to fight a stronger power; people developing superpowers – and put them all together, again led by a unique creative style, into something that feels really special.

I asked myself at the end of this series “Will I miss this once it’s gone?”. For a lot of series recently, I’ve simply watched it, then moved onto the next without much of a second thought. However, Mob Psycho is a show that I really will miss. Mob Psycho is a strange show: the drawing style is unattractive, the people are awkward and unattached, and even the intro – on which I could write another 500 words – is disconcerting and out-of-touch. However, it all somehow comes together to create a uniquely disorientating, incredibly funny action series that I sincerely hope will return for more soon!

If you liked this you’ll love: No Game No Life – As you can imagine, it was almost impossible to find a recommendation for Mob Psycho. However, there is a show that can just about match the ridiculous nature of this show’s animation. NGNL throws two relatively-normal otakus into a fantasy world full of vibrant colour. Where Mob Psycho is an action-comedy with drama, NGNL is an out-and-out comedy, and is certainly much lighter than the show above. However, they both share extravagant animation styles that create very memorable shows.

Orange follows the relatively plain life of Naho Takamiya (bottom-left) – a young, shy high-school girl, and her close group of friends. One day, she receives a letter apparently from herself, written ten years in the future. Her future self recalls perfectly her day at school, particularly the arrival of a new transfer student, Kakeru (bottom-centre), who sits next to her. Her future self explains that she has many regrets ten years into the future, many of them concerning Kakeru, who she explains is ‘no longer with us’. Future Naho continues to send Naho letters, asking her to change certain things that she does (for example, bringing a spare lunch for Kakeru one day). Naho, despite being brought out of her comfort zone by the requests – and being unable to complete some of them – starts to fall for Kakeru, and takes it upon herself to try to save him.

Seriously, read the six-episode review. This is the basis for the review below.

In the first six episodes, as you can see in our review, this was a beautiful series. Not only was the animation and drawings so natural and honest, but the writing and understanding of these young, innocent high-schoolers instantly created a touching series. This was perhaps the only series I’ve ever seen that takes that high-school romance genre and makes it into something so sophisticated and emotionally engaging, and the first six episodes set up a story that gave Orange the potential to be one of the best non-action anime I’ve ever seen.

Then came the second six episodes.

Orange, for whatever reason and at the flick of a switch, turned from something that could have been incredible into my go-to example of a show falling off a cliff at the halfway stage.

First was the art. Beautiful, atmospheric backgrounds became lazy drawings, and emotional, detail-filled characters literally became circles with black eyes drawn on, as if a child had created it on Microsoft Word. Sure, it wasn’t like that the whole way through, but this happened enough times in each episode to put a large stain on the show’s well-built reputation. The story also tailed off, with episodes passing by without any real feeling or impact. A strong finish did somewhat save Orange in this department, but the pure fact that a show that after six episodes looked set to become one of the best I’ve ever seen ended up having to be saved whatsoever is something of a tragedy. 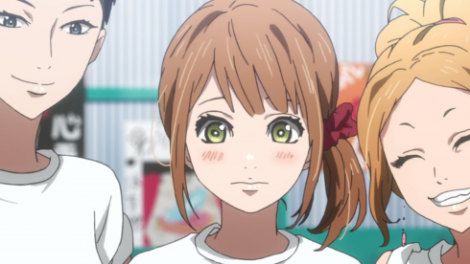 As I wrote above, what was supposed to be a beautiful show has become the embodiment of the old idiom ‘counting your chickens before they’ve hatched’. Overall, this is still a pretty decent show: there’s a beautiful story that, for the first time, shines a more honest and touching light on the often over-dramatised high-school age group; a show filled with honest and likeable characters and a lot of beautiful art. However, it had the potential to be so much more than that, and as someone who was watching it weekly, watching it build itself up only to slowly dismantle all the great work it had already done, there’s more than just a tinge of regret and disappointment for me when I think about Orange.

If you liked this you’ll love: Re-Life: Another anime from this year that looks at having a second chance at high-school life, although this show takes it a little more literally. While Re-Life – which gives the main character the chance to live through high-school again – certainly has a more relaxed feel, there is still a good level of honesty that encapsulates the feel-good nature of the show, so this should appeal to fans of Orange that enjoyed the honest nature of the show.

Another episode down, and two of the heavyweight shows of this year added to the ever-growing roster of anime reviews here on The Culture Cove.

50 Anime Review is coming ever closer. As you can imagine, there will be a lot of articles surrounding this when the 50 mark reaches us in the new year. There’s still room for some incredible shows before then, though.

Make sure you follow The Culture Cove to see the best anime reviews before anybody else. Look out for episode 22 of Anime Pocket Reviews, featuring the acclaimed sci-fi series Psycho Pass!