Welcome back to Anime Pocket Reviews!

As the Winter 2019 anime season comes to an end, we have plenty of series to have a look at over April! Later on we cast our eye over one of the biggest series from the previous cycle but first of all, we return to a series that has blown hot-and-cold since we first got into it way back in 2016!

Following on from Volume 5, the RWBY team are back together and, with the Relic of Knowledge in their hands make their way to Atlas, under the direction of Professor Ospin and Qrow (behind). However, while on a train to the port city of Argus they are attacked by a wave of Grimm attracted by the Relic and the heroes are forced to cut their carriage from the train to save the other passengers. Now, stranded in the snowfields of Anima, tensions begin to rise as they search for a way to Atlas and the true nature of their task is coaxed out of the secretive Professor.

Basically Plot: The RWBY team are back together as they and their friends try to deliver the Relic of Knowledge to the safety of Atlas, while the true nature of their mission is revealed by the secretive Professor Ospin.

RWBY is a series that we have had some very outspoken opinions on in the past. Put simply, the first three seasons blew us away, but the subsequent two have been poor, to put it mildly. The most annoying thing was that the fix seemed easy, and so it has proved with a sixth entry that is by far the best season since the RWBY team originally got split up.

It is absolutely no surprise that having Ruby, Weiss, Yang and Blake side by side once more has helped Volume 6 become a much more enjoyable experience. The story itself is not too different from RWBY Volume 4, which ranks up there with the second season of Tokyo Ghoul as one of the worse follow-ups we’ve seen in anime and TV history. Volume 6 is, ultimately, another journey series that, save for a few historical revelations, leaves the series in much the same place as it was previously. However, said revelations felt like they had some serious weight, and the development of the main characters throughout the series felt deep and was really good to see.

The one thing that continues to, and seemingly will always hold RWBY back from being a great series full-stop is its writing. While there was a noticeable improvement to much of the dialogue in this season, it still feels incredibly amateurish especially when you start comparing it to more mainstream TV series. There are still more complete duds than exciting one-liners.

Looking past the consistent writing issue, though, Volume 6 did everything as good as I’ve ever seen it before from RWBY. The balance between comedy and action was nigh-on perfect, while the animation seemed to be taken up a notch, also, with real attention to detail in the movements of the characters, particularly in quieter moments when it has fallen down in the past.

RWBY is a series that has frustrated as much as it has amazed. In Volume 6, though, it has created a season that took the series back to the old-school entertainment it once was. Bright, engaging and with plenty of backstory to get stuck into, you can forgive the writing, odd episode times and occasional plot failings purely for the almost endless fantasy entertainment that RWBY provides.

ANIME RANKING: #31 – A slight improvement for RWBY’s ranking thanks to this great season, seeing it leapfrogging Anime Gataris and Honey and Clover!

If you liked this you’ll love: Akame Ga Kill (#14) – Following a gang of superpowered assassins working against a corrupt government, Akame may seem different at first but these two shows share a lot of similarities. A similar blend of comedy and action combined with the heavy writing that we’ve been crying out for from RWBY, this is an excellent action series to watch.

Following on from the first season, Shigeo ‘Mob’ Kageyama (behind) continues to grow as both an ordinary teenager and a powerful esper under the ‘tutelage’ of Reigen Arataka (left). However, as they return to their menial jobs Reigen can sense a change in Mob’s psyche, as he becomes a person for himself. As cracks begin to show in the master-mentor relationship, will the erratic powers of the city be able to unite when an even larger menace threatens their existence?

Basically Plot: Following on from season one, Mob continues to grow as a person under Reigen’s mentorship until tension begins to grow in their relationship, just as a new enemy threatens the city!

One of the most anticipated series of the Winter 2019 cycle, following up the incredibly exciting first season of Mob Psycho (ranked #12 at The Culture Cove at the time of writing) was always going to be a challenge. However, this is a really good series that offers plenty for fans of the first.

It will not shock you to hear that the story in the second season doesn’t quite have the strength of the first, which followed a beautiful pattern to its conclusion. Instead, the second season appeared to start without any clear focus, while its big conclusion is barely introduced as a concept until the last four or five episodes, the giant battle feeling somewhat tacked onto a separate prior story to give the series its closure. However, what that quiet, unhurried opening segment gave to us was something that is so often the negative to action series like this. Mob Psycho 100 II delivers some real, genuine and evident character progression!

It is often so easy for action series, especially those involving fantasy powers, to barely alter their characters regardless of the mind-shattering events they go through. However, in this season we get to see the shy Mob grow as an individual and learn how to be strong with people. We see this strong moral compass develop inside the main character and this theme of morality becomes a key aspect of the big battles that take place at the end of the season.

The problem with the many fights at the end of the season, beyond being almost separate to everything seen at the beginning of the series, is that it all felt a little overplayed. By the time the final episode arrived and people were trapping each other in concrete balls made of skyscrapers while floating in the air Dragonball Z-style, you zone out of the emotion of what’s happening because when you’ve been hit by a forty-storey building, very little else can make an impact. Many of the exciting, colourful characters that proliferated the first season were also reduced to fringe roles, leaving Mob and the equally one-dimensional Touichirou to conclude the series.

However, the early stages of this series are classic Mob Psycho, delivering quirky, slapstick characters in a vibrant world full of action and exaggerated drama. Even the conclusion, although not very original or ground-breaking, creates a solid conclusion which will more than satisfy devoted fans of the series alongside those that love ginormous action. Is this as good as the first season? Overall, no, but it’s a very good series nonetheless!

ANIME RANKING: # 13 – A one place drop, but Mob Psycho retains its enviable position amongst anime’s royalty!

What are you most looking forward to watching now the winter season has concluded? Let us know on our social media channels and subscribe to The Culture Cove for regular anime reviews and recommendations! Keep an eye out for episode 61 dropping next week, featuring our review of another big second season, Kakegurui XX! 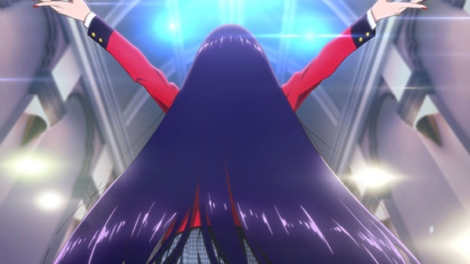