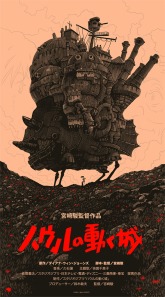 Directed by Hayao Miyazaki, based on the novel Howl’s Moving Castle by Diana Wynne Jones

Howl’s Moving Castle is one of the most famous films from the renowned Japanese filmmakers Studio Ghibli, and while this colourful film shows some the creativity of the studio at its best, it also shows some of the studio’s flaws.

Set in a fictional, magical kingdom living happily against the backdrop of war, the story follows Sophie, a young hat maker peacefully going about her simple life in the city until she accidentally gets wrapped up in the misdemeanours of a famous wizard known as Howl. After Howl saves her from evil spirits their commander, the Witch of the Waste, visits her at night and puts a curse on her, turning her into an old lady. Unable to tell anyone about her ailment, she heads off into the wilderness in search of Howl and his notorious moving castle, which she forces herself into. Employing herself as the castle’s housemaid, she works with Howl and a selection of other misfits and miscreants as the young wizard continues to fight against something, learning about his troubled past and the war that he has put himself in the middle of.

Of course, because this is a Studio Ghibli film the first thing that strikes you about Howl’s Moving Castle is its seemingly boundless imagination. We are immediately dropped into a fantasy world full of colour, the type of world where a castle walking on chicken legs and black blob men and people walking on air don’t have to be explained. It’s a wonderful thing to watch, especially at the start – a youthful adventure into a magical world.

However, when the movie begins to settle, what started off as boundless ideas begins to feel like a movie with too much scope. This is the type of film that tries to follow its characters as opposed to a plot or story. However, Howl’s Moving Castle seems to take this even further, focusing almost entirely on character stories and being in desperate need of a storyline. It is easy to get lost in this film thanks to its visuals, but in the odd moment you pull your head out of the rainbow you suddenly remember that you have no idea what is happening, or why, or to what end. I have since discovered after watching this movie that it is something of a commentary on the evils of war, and although this is obvious during the viewing this is far from a central theme while watching it – perhaps it should have been, because the story desperately needed something to latch onto.

Howl’s Moving Castle follows the adventures of Sophie who, as a result of her sudden ageing, is quite limited in terms of the adventures she can take part in, meaning that you spend a lot of the time kind of wishing that you could follow Howl instead. However, what this story does well, particularly with Sophie, is telling simple character narratives. The group of misfits gathered inside the castle over the course of the film all have their moment to shine in this empty stage of a movie, meaning that while the story doesn’t necessarily deliver in a traditional sense, the film as a whole is a good watch thanks to the charming moral stories of the people involved. 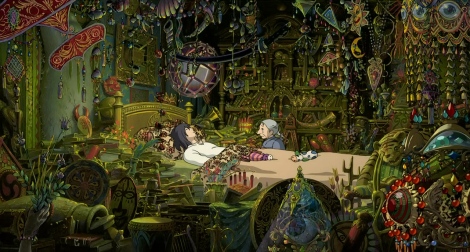 Simply satisfying for fans of Ghibli’s other works, Howl’s Moving Castle is far from being a great film, but its interesting characters and their simple sweet stories are good enough to keep us entertained while engrossing ourselves in the fantastically deep and imaginative world of Studio Ghibli at their inventive finest.

Click here for more Studio Ghibli Reviews, and make sure to subscribe for regular film, anime and music updates!