Welcome to the next episode of Anime Pocket Reviews!

This episode is only a quick round-up before we announce our 2018 Anime Awards winners later this week! Later on we take a look at a videogame adaptation from earlier this year but before that we have a Culture Cove first: an anime (tv series) movie! 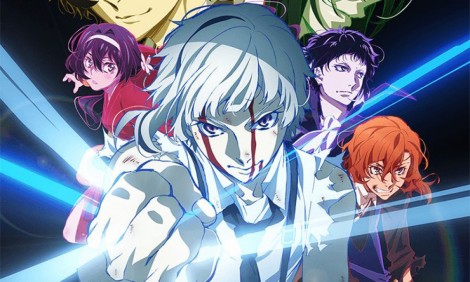 Dead Apple follows members of the Armed Detective Agency as they are tasked with finding the source of a mysterious occurrence slowly creeping towards their city – a manmade fog that appears and disappears across the world at will, causing gifted people inside to kill themselves. However, when the fog arrives around them they are left powerless. With the city thrown into chaos and the detective members lost in the fog, Atsushi (centre) has to rely on Izumi (left) and others that they find as they figure out how to stop the fog and save themselves, and why Atsushi’s mentor, Osamu Dazai, has joined sides with those responsible.

Basically Plot: The Armed Detective Agency are called into action when a mysterious, manmade fog begins killing gifted (superpowered) members of the public.

There’s a reason this film is featuring in our APRs and not as its own post. This certainly isn’t a tv series, but it didn’t feel like a genuine cinematic experience either, which probably goes a long way to giving my opinion on Dead Apple. I’ve never before watched a film spin-off of a movie – although some sources claim that this is the third season of Bungou Stray Dogs(?) – and there’s a reason for that. These spin offs usually struggle to capture the heart of a series-worth of content, and that’s one of many problems with this film.

If you hadn’t watched Bungou Stray Dogs before, this could be seen as an entertaining little anime flick, however the set up at the beginning is so rushed that it would be impossible for you to understand the majority of the film more than ‘this is superpowered people fighting each other, and the good guys win in the end’. Dead Apple throws you immediately into the action, a government call outlining the mission and an almost useless attempt at explaining people’s abilities, totalling about five minutes of film, being all the setup you get. The film is nice to look at – the series’ beautifully sharp animation style getting a touch of cinematic gloss – but even the voice acting felt inadequate in this film, with far too much screaming and a general lack of direction in major moments.

So, it doesn’t really work for people who haven’t seen the series, but what about fans of the series who know the backstories? I’m afraid it doesn’t do much for them either.

Much like mentioned above, the setup of the film is so rushed that you are left in no doubt from the get-go that you’re essentially watching 90 minutes of fan service. The show bounces from character to character, trying to get as many popular faces onto the screen in the time they could squeeze between the very predictable fights. The interesting moments of the story didn’t remain interesting for long, with the fog’s secret revealed almost as quickly as you begin to question it, and while the ‘bad’ trio’s interactions are quite enjoyable, much of what they say ends up feeling pointless. There must have been at least three or four different characters who at one point said something along the lines of ‘this has all gone exactly as I predicted’, and I could have said the same, and that’s because the story is just not good!

All of this being said, though, I must admit that I don’t regret spending my time watching Dead Apple. As a fan of the series it was nice to see the familiar faces in action again in a well-animated film that at least showcases some of the lovable aspects of the series – Dazai is as entertaining as ever, while the conflict in the usually bad characters is enjoyable. However, much like when other materials are adapted into film, Dead Apple is nowhere near the quality of BSD’s previous seasons, missing so many marks – there’s no intriguing story, no eye-catching direction, and even the pathetic amount of comedy in this film is a negative, something which the main series balances fantastically well. Dead Apple cannot be recommended to newcomers on account of it being too poorly explained, and while there are bits that fans of the series will take pleasure in seeing, this isn’t a film that’s going to have anyone excited. 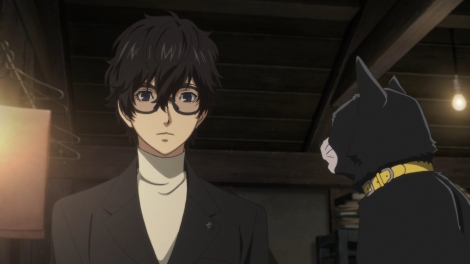 Based on the videogame of the same name, the story follows Ren (above), a high schooler with an unfortunate past who is sent to live in Tokyo under probation. Seen as a dangerous outcast at his new school, he suddenly awakens to a mysterious power that allows him to discover and explore manifestations of people’s darkest desires. Using the power to correct the wrongs that he sees happening around him, over time he creates a group of vigilantes with the fellow outcasts around him. Calling themselves the “Phantom Thieves of Hearts”, their secret group attracts the interest of the whole of Japan, with their actions seen to blur the definition of justice.

Basically Plot: Follows Ren and his group of vigilantes as they clear the world of its evil deeds and become caught in conspiracies as their own form of justice becomes blurred.

This was always going to be a unique anime experience. As far as I can recall, this is the first anime series that I’ve watched where I’ve seen the source material first! I was a huge fan of the Persona 5 videogame – all 100 hours of it – so when I first heard that there was an anime coming out I was super excited. I quickly found out, though, how hard it was going to be to squeeze an incredibly detailed, deep and, above all else, long videogame into an anime series. Persona 5 The Animation has tried to squeeze approximately 6,000 minutes of content into 624 minutes of tv series. Doing basic maths on that, the anime had to portray just under four hours of videogame content in every 24-minute episode.

It won’t surprise you, then, when I say that the story in this anime series is vague, to say the least. The anime is a direct adaptation of events in the videogame, and the first few episodes of this series are some of the worst in the whole series, as the show struggles to decide how much to explain. In the end, it delivers very little information early on, leaving the audience to piece together what is going on by themselves – although in terms of the story, the game wasn’t very good at doing this, either. It’s a problem that the story faces the whole way through – you don’t necessarily feel the series moving too quickly, but you certainly notice the lack of clarity on so many of the series’ key points.

However, one of the key selling points for the Persona 5 videogame was its unique style, and for the most part that has carried on into the anime. The basics of the animation in Persona 5 are nothing particularly special, but the series does a great job of recreating that cool high school look throughout. From the character’s movements to the settings – both real and fantasy – and even down to the fine details such as the excellent opening and ending credits, Persona 5 The Animation oozes cool in a way very few other anime series can manage. This, combined with an awesome soundtrack taken straight from the videogame, makes what is in essence a very ropy and unoriginal fantasy anime into an incredibly watchable series oozing cool. Like I said earlier, though, you may have a totally different experience with this anime if you haven’t seen the videogame beforehand!

ANIME RANKING: #76 – Beautiful graphics can only take you so far, and the disappointing story finds itself alongside similar visual titles such as Occultic;Nine and Flip Flappers.

If you liked this you’ll love: Beyond the Boundary (#29) – Following a club of high schoolers who hunt monsters during their spare time, this is an incredibly quirky series that blends real life comedy and fantasy action really well. While the animation style and story are both noticeably softer than in Persona 5, this show does a fantastic job of creating its own style with animation that ranks among some of the best we’ve ever seen!

Subscribe to The Culture Cove and be the first to see our 2018 Anime Awards, starting this weekend! 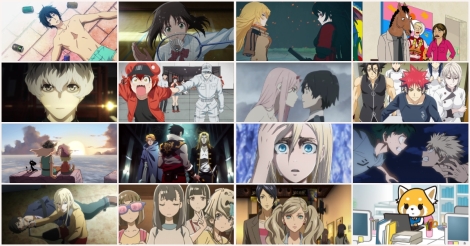